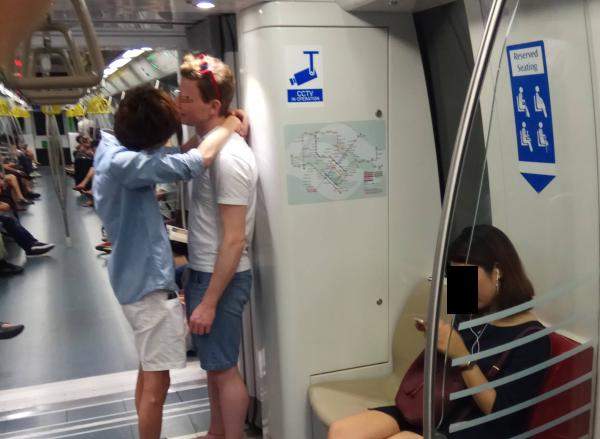 There is an article in All Singapore Stuff titled ‘Homosexuals should be thankful for Pinkdot, we have already given them a lot of public space‘. The letter writer said that she saw two men openly kissing in the MRT and wondered what she would say if her kids asked her, “Mummy, why are the two men kissing?”

I wonder how the letter writer will respond if her kids saw THIS:

And asked her what they were doing.

People display intimacy in public spaces for many different reasons – love, lust, lunacy…but most often because they have very little self-control. Self-control is what separates human beings from animals.

Perhaps that is the lesson for little kids? Maybe that is what the mother should have told them if they had asked?

No one should tell anyone else how to live as long as they do not commit a crime, even if they are a minority. No one should publicly shame or bully minorities.

It seems the letter writer is more obsessed with how different people have different kinds of sex rather than in giving her kids proper education.

It is little wonder that she wants a sex policeman like Chan Chun Sing.

—
The above is a letter from one of our readers who prefers to remain anonymous. The writer said that he is in a committed heterosexual relationship.Follow us on Social Media