The Independent Singapore News
Home News Featured News What happened to the flags on National Day?

What happened to the flags on National Day?

In an opinion piece, writer Benjamin Lim expressed how today, unlike in the past, hardly any Singaporeans celebrate National Day by putting up flags in their windows. Whereas in years past, it was customary for most citizens to proudly display the country’s colors. Mr. Lim wrote, “There were probably a few residents who felt pressured to conform or be singled out as the black sheep on the block. But you could still feel the community spirit in the air,  and it was clear that National Education was indeed a success.”

However, the National Day scenario today is quite different. He mentions that in HDB blocks, it’s difficult to find even 25 percent of the units that still display flags. And the flags that are put up are not done so on the initiative of individuals, but come from Residents’ Committees (RCs).

“Step inside Punggol and you would be forgiven for thinking the new BTO estates are a breakaway state. Apart from a few pathetic banners and flagpoles by the side of the road, there’s hardly any love for what is supposed to be the most momentous occasion in the country,” according to Mr. Lim.

He also observes that many of those who still keep the tradition of putting up flags are older residents, who do so out of sheer force of habit.

But Mr. Lim believes that this is not necessarily a bad thing—but a sign that Singapore’s citizens have matured in their perspectives, and are no longer needing a symbol to show their love for country. “…could be that how much we love our country shouldn’t be based on how many flags we put up. Perhaps, just perhaps, Singaporeans already understand that patriotism transcends (often empty) national symbols, and that we should be the change we want to see.”

Some netizens agreed with Mr. Lim’s assessment. One commenter wrote, “Nowadays, NDP is in my heart, no need to display flag to show my S’porean spirit. My loyalty to my country is quietly served 22 cycles of reservist till 50.”

However, others expressed the possibility that the lack of flags indicated Singaporean’s current feelings.

However, Mr. Lim is not the only Singaporean to notice how few flags are on display nowadays. On Facebook, some citizens have been posting about this as well.

Growing up in Singapore, I used to see every household putting up the national flag ahead of national day.. this morning…

Such posts seem to have resonated with many, based on the shares and comments that they have received, with many agreeing that there are much fewer flags than before. 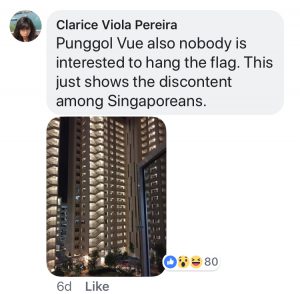 One commenter felt that hanging the flag had nothing to do with national pride, but was just something to do in one’s youth, at a time when they were less busy. However, many disagreed with this.