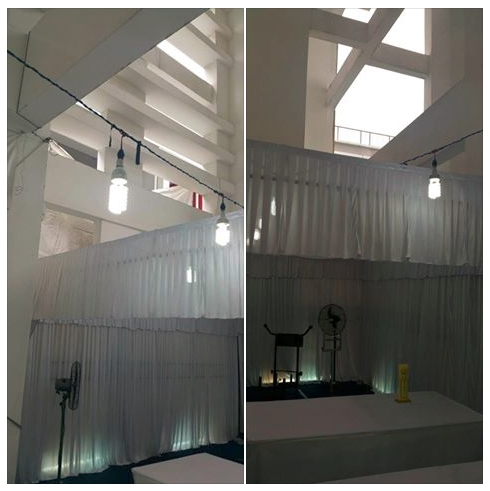 Facebook user Natalie Soh shared a note in her Facebook addressed to her MP, Dr Vivian Balakrishnan. Dr Balakrishnan is also the Minister for Foreign Affairs. She posted the note yesterday (20 Jul) afternoon.

In the note, the user explained how they tried to book a void deck space after her grandfather unexpectedly passed away. The town council she claimed, allotted her a space, but that they committed the error of double-booking.

The town council allocated them another space when the error was discovered and after several negotiations. But the user claimed that because of the recent bad weather, this new space was unsuitable to hold a wake. The wake was severely affected by the heavy downpour on 19 Jul.

She said that despite repeated attempts to renegotiate for a new space for the wake, the town council was not flexible to take the matter further. She said, “in order to keep his job, he (the town council staff) decided to disrespect the dead lying in the coffin waiting for his agreement.”

Just in case you can’t see what Natalie said, this is what she posted.

—
To @vivianbalakrishnan Here we are, looking at the facts of what support and humanity is about.

My late grandfather residing in Blk 26 ghim moh link who unfortunately passed away ytd in the early evening is now lying in the coffin. We were given heads up to book a multi purpose hall at blk 23a for the use of 3 days. I am the deceased granddaughter who resides at blk 22. I was shocked to realise a wake was held at that area, so i approached one of the deceased direct kin to understand the situation. She mentioned the wake was held till friday and suggest me to look for alternative space under my block. And she mentioned that there might be a birthday party under blk 22 void deck on Friday thus the town council gave them blk 23A.

After a site reccee we decided to seek permission to use blk 24A, another multi purpose hall at level 3, however our permit was rejected by them.

We took the available slot of blk 22 void deck since we could not have it held at blk 23A nor 24. Now we are looking at the picture, it was the town councils mistake to have double booked blk 23A previously and they accomodated by giving us another space at blk 22. However, they did not realise this huge mistake till 10hours later.

It was a heavy downpour last nightfrom 3am till this morning 10am, i believed all readers had experienced it.

We made panic calls town councils at holland bukit panjang to inform them that this location under blk 22 is not suitable fpr the wake as rain were splashing in. The sheltered areas were severely wet and even flooding in some areas. The carpets were soaking wet, with soggy drapes that seem to appear to fall. Rain access through the loops of the 3 storey high wall , no way a tentant or canvas could be done at the height. Contracters arrived early morning at 9am to review the situation and they were eager to help. However due to the infrastructure designs, they were unable to assess to the heights of the walls. We were extremely concern thus we had to request a hold on the coffin arrival till set up was done appropriately.

Here is what the town counsil replied. They are unable to give us a new venue and that they insisted the location was feasible. Not to mention even releasing a venue that is not even done building beside blk 22. This is unacceptable. Horrifying to hear was that there was no compassion nor humanity in the decision making process. We as civilians understand and respect the rules required to apply as we had been through my grandma passing just last month on june 18. It was smooth. However this time, it was a entire let down from town council.

It was their mistake at the end, but they expect us to review the entire ghim moh and ghim moh link with the coffin waiting and get through all stages of procedure.
All 14 of our family members who were tired from seeking location to location, getting our calls on hold for the longest 6 hours waiting for an approval. Till 11am, nth was done. No calls to reassure any location. We were worried abt bringing the coffin in as the weather was bound to rain again.

From a hotline to a manger, to the next manager and to other in charge, no one has the authority to give a single exemption for this case. And it was their mistake. Looking at this, it got me furious. Names from Ms Angeline to Ms Serena to another guy named Mr Joel. And we had to get mr joel down to the site to access this situatuiom immediately. I’m pretty sure the person behind those phones have no clue of the anxiety and the loss of a beloved to be dangling in a midst.

In the last resort if we were to be forced, we will have to use blk 24 multi purpose hall without a permit. We had taken a step back to not pursue the matter of the double booking and understanding the other family’s loss thus we will not drive the family away. Insteasd, that should be the town council’s job. Now that they are not responding in the most effective and efficient way. We will have to bring this matter up. We went by the book, but your book of law is not even in the right place. Town council messed it out, so please sort it out. You will never understamd this loss, but respect should be given.

11.45am, mr joel assessed the ceiling and even mentioned that its not viable to hang up the canvas as its too high..

Rules are meant to follow, but humanity shouldnt be abused. I hope the mp take this case seriously. If noise is an issue that the town council is concerned, then we will do a petition if required. I hope all the neighbours could give us the support and assist in this situation. If MP does not approve, we will proceed still. We as a citizen and neighbours will stay united. I hope all my neighbours could help us by taking a close look at what we are dealing withFollow us on Social Media