The elderly man was filmed taking out almost every plum in the box, looking at it and then putting it back in the box 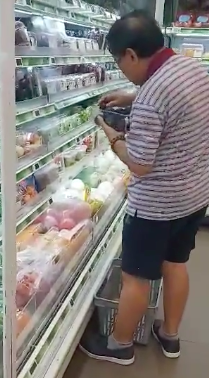 A video of an elderly man opening boxes of plums in order to choose the best ones has gone viral.

Circulating on social media since Friday (Mar 27), the video of the elderly man garnered 1,400 comments, mostly of netizens berating him for his actions.

In the 40-second-long video, the man can be seen opening up a box of plums and examining each one.

He was filmed taking out almost every plum in the box, looking at it and then putting it back in the box. The uncle was also filmed prodding and poking each fruit in the box he was holding, before he closed the box, only to put it back on the shelf.

The video was captioned, “This uncle at Kovan NTUC open up almost 5 boxes of plums to pick and choose every one of them. Oi, dun do this, especially during such times leh”.

While it was unclear if the man had done the same to other boxes of fruit, since the video only showed him opening one box, the netizen who filmed the video alleged that he opened at least four other boxes.

In light of the Covid-19 outbreak, the elderly man’s actions come across as extremely irresponsible. It may be possible that a person can get COVID-19 by touching a surface or object that has the virus on it and then touching their own mouth, nose, or possibly their eyes, but this is not thought to be the main way the virus spreads.