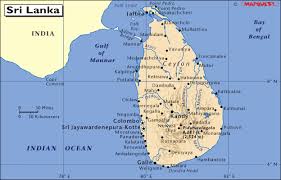 Lying off the southern tip of India, Sri Lanka has long been torn by a prolonged and bitter civil war between the majority Sinhalese and Tamil minority in the northeast.  The tropical beauty is regaining its tourism industry and attracting visitors after the bloody civil war.

The civil war arose out of ethnic and communal tensions. After more than 25 years of violence the conflict ended in May 2009, when government forces seized the last area controlled by Tamil Tiger rebels. But recriminations over abuses by both sides continued.

There is a long-established Tamil minority in the North and East. The British brought in Tamil labourers to work the coffee and tea plantations in the central highlands. This made the country, formerly called Ceylon, a major player in the tea production industry.   The British favoured the Tamils over the Buddhist Sinhalese.

The majority Buddhist Sinhalese resented what they saw as British favouritism towards the mainly-Hindu Tamils. Sri Lanka is also home to one of the oldest stronghold of Theravada Buddhism. The Tamil population in the north and east has established a vibrant Hindu culture that pays homage to India.

This very diversity has long threatened to undermine national unity and torn the country apart. For almost three decades Sri Lanka was at the forefront with a bloody civil war. The civil war damaged the economy, including the bustling tourist sector. Although most of the fighting took place in Jaffna, the war proliferated to other parts of Sri Lanka such as the East. The Sri Lankan Army and the LTTE, or Tamil Tigers, battled it out ferociously until the final victory of government forces in early 2009.

International concern was raised on the high death toll and internal displacement of civilians during the final stages of the war. There are allegations that the government had ordered the execution of captured rebels.

The United Nations Human Rights Council (UNHRC) released a report in 2011 alleging that up to 40,000 Tamil civilians may have been killed in the final months of fighting. It remains unclear how many people died in the decades-long civil war.  The government was also accused of shelling civilians and blocking access to food and medicine supplies to people stuck in the war zone.

UNHRC has pressurised the new Sri Lankan government to address the skepticism among minority groups, especially the ethnic Tamils.  Former strongman, Mahinda Rajapaksa, who was ousted as president in January, failed to promote reconciliation and address accountability issues and refused to cooperate with any UN investigation.

The new administration, unlike its predecessor, has vowed to stimulate post-war reconciliation, address human rights violations and bring the culprits to justice. UNHRC scheduled to release another report on war crime allegations against civilians by soldiers and rebels during the last few months of the war. It postponed the release from March until September after the new government showed willingness to cooperate and requested for more time.

The new government, headed by president Maithripala Sirisena, wants to set up its own judicial inquiry to investigate the human rights violations. The UN Undersecretary-General for Political Affairs Jeffrey Feltman said that the new government should restore trust by addressing detentions and disappearances of ethnic Tamils during the civil war. He added that the government should justify why land has been seized by the military and reduce the number of military personnel in the former war zone, Jaffna.

In response, Sirisena’s government pledged to set up a domestic inquiry to investigate into the war crimes from the civil war. Although investigators from the UN will not take part in the inquiry, their views will be taken into consideration. According to an online article on BBC, Sirisena said that an investigative committee would work “efficiently, in a balanced, legal and impartial manner”.

“When asked if UN investigators would be involved, the president said: “We are ready to get advice and their opinions for the inquiry, but I don’t think we need any outsiders because we have all the sources for this.”

Sirisena has stressed that reconciliation is top on the agenda and vowed to release private land occupied by the military during the war and free suspected rebels detained without trial. He also fired a former military official who was the governor of the Northern Province, replacing him with a civilian official.

Only time will tell whether Sirisena’s government will prove to be different from its predecessor.Follow us on Social Media