The father wrote that on the day of the incident, Sunday, October 6 at about 8.30pm, an e-scooter rider who claimed to only be going at a speed of 17km/h “dash(ed) across and hit my baby daughter” The father of a 3-year old girl has taken to social media to upload a video of a Personal Mobility Device (PMD) rider speeding and crashing into his child at the void deck of a Housing Development Board (HDB) block.

In his post, the father wrote that on the day of the incident, Sunday, October 6 at about 8.30pm, an e-scooter rider who claimed to only be going at a speed of 17km/h “dash(ed) across and hit my baby daughter”.

In the video, the child can be seen playing at the void deck. As she walks behind a pillar, the girl is obscured but a PMD rider can be seen speeding towards her. He crashes into her with a loud noise and falls some metres away. The child’s mother is startled by the noise and immediately runs towards her. The video footage was unable to even capture the rider’s face or details because of the speed he was travelling at. He appears as a blur. 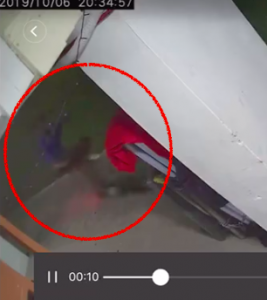 In his Facebook post, the girl’s father, Garnell Glenn Bernard also asked if “pmds (are) allowed to ride on the pathway or corridor or the void deck?”

Following the incident, he wrote that his daughter had suffered minor injuries on her thigh because of it.

The incident caused much outrage amongst netizens because last month, after colliding with a PMD, Mdm Ong Bee Eng passed away four days later because she sustained severe brain injuries and suffered from multiple fractures. The use of PMD’s at void decks of HDB flats were banned last month (September 1), and those convicted of violating the ban or riding recklessly may be fined up to S$5,000. The ban does not apply to personal mobility aids such as motorised wheelchairs and mobility scooters. /TISG

Read related:65-year old cyclist in coma for 4 days in PMD accident passes away