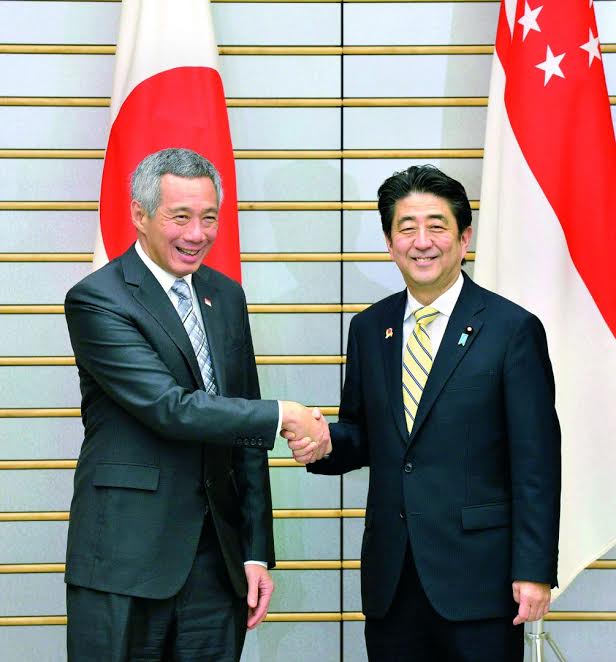 Speaking to the media later, PM Lee again reiterated that Singapore is a non-claimant state and does not take sides on the competing territorial claims in the South China Sea. But he also said that he wants to see “a rules-based regional and international order” be protected.

This order, he said, “upholds and protects the rights and privileges of all states, and shows full respect for legal and diplomatic processes in the resolution of disputes.”

However, many Chinese are not buying into PM Lee’s assurance that he is “not taking sides” in the territorial claims in the South China Sea.

Prof Zhu Feng, the executive director of the China Centre for Collaborative Studies of the South China Sea and also dean of the School of International Relations at Nanjing University, wrote an opinion piece which was later published on the Chinese edition of the influential Financial Times on Tues (4 Oct).

(Translation: Despite its frequent declarations of neutrality on the disputes over the SCS islands and maritime rights, Singapore has clearly chosen sides, as evidenced by its foreign and defence policies. Singapore is a military ally of the US and has allowed US littoral combat ships to be stationed at its Changi Naval Base. In addition, the US was granted approval to deploy its P-8 air reconnaissance aircraft from Singapore’s Paya Lebar Air Base to conduct surveillance in the SCS.

After delivering a keynote speech at the Special Session of the Nikkei 22nd International Conference on The Future of Asia on 29 Sep, Prime Minister Lee Hsien Loong told reporters that Singapore must never be seen to be “playing multiple sides” on an issue. He also “worried” over China’s rise and the geopolitical situation in East Asia. These remarks show that Singapore has already “chosen sides” on regional politics and defence issues.)

US backs Philippines and wants China to recognize tribunal’s ruling

Indeed, the US has always wanted China to recognize an international tribunal’s ruling against its sweeping claims in the South China Sea. Hence, China is suspicious of any associations with the US over matters on South China Sea.

After the tribunal’s ruling against China, Mr Kerry went to the Philippines to show US’ support for the Philippines. Speaking in the Philippines, he then backed Manila’s assertion that any talks over the sea must have that ruling as its basis.

China rejects the ruling entirely and objects to any talks that is based on it. The Philippines refuses to negotiate on that basis, leaving any talks in limbo.

Meanwhile, China has gone ahead to hold large-scale war games with Russia in the South China Sea three weeks ago. The exercise began on 13 Sep and concluded on 19 Sep.

Dubbed Joint Sea-2016, the Chinese and Russian naval maneuvers involved the use of both warships, aircraft and marines in practice combat operations — a clear sign Beijing continues gearing up for a future potential military conflict with the US over China’s territorial claims in South China Sea.

During the exercise, both Chinese and Russian naval forces practised taking over islands.

It was the largest joint exercises since the two navies began holding the war games and the first in the South China Sea. Chinese military officials described the war games as “a strategic measure” aimed at increasing military and especially naval cooperation.

No doubt, if war really breaks out between China and US over South China Sea, Singapore’s Changi Naval Base and its Paya Lebar Air Base will be among the first to be targeted, thanks to PM Lee’s “neutrality” stand.