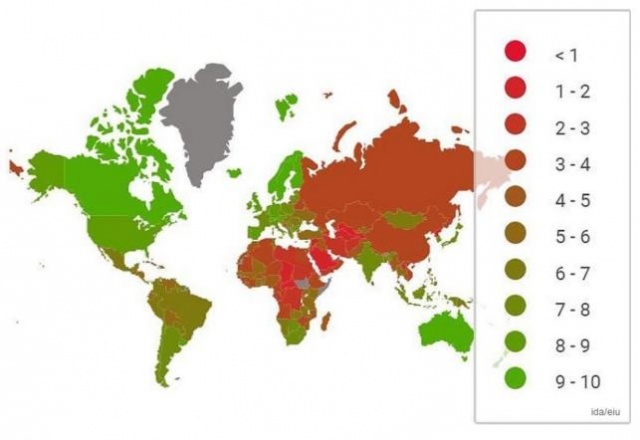 The yearly Democracy Index was released yesterday by the Economist Intelligence Unit (EIU). Singapore’s rating dipped from 6.38 for 2016 to 6.32 for 2017. This reflects a worldwide dip in scores, particularly in Asia. On a scale of 1 to 10, the average score around the globe for 2017 went down from 2016’s score of 5.52 to last year’s 5.48. Countries in Asia performed the most poorly in comparison to other regions.

The London-based Economist Intelligence Unit’s Democracy Index provides an overview of democratic conditions worldwide.  It involves five criteria in evaluating democracy: electoral process and pluralism; civil liberties; the functioning of government; political participation; and political culture. 165 states and two territories are divided according to their current type of government, “full democracies”, “flawed democracies”, “hybrid regimes” and “authoritarian regimes.” This year’s report includes a special feature on the condition of media freedom around the globe, as well as the difficulties and opportunities that currently confront freedom of speech.

This year’s results reflect many more countries experiencing a downward trend (89 countries) as opposed to those where democracy actually improved (27 countries). These are the poorest results since 2010-2011, a period after worldwide economic and financial downturn. This year’s index shows that Asia had a “tumultuous” year. Until 2017, the region had been showing great improvement with regards to its democratic institutions, but compared to other regions, Asia in 2017 experienced the highest difference in score from the previous year. Asia’s score for 2017 is 5.63, considerably lower than North America (8.56), western Europe (8.38) and Latin America (6.26).

Asia also shows the biggest score deviation between nations, from New Zealand, the country ranked at number 4 worldwide with a score of 9.26, to North Korea, which ranked at the very bottom, with a score of 1.08. Asia still only has two “full democracies,” namely New Zealand and Australia.

Additionally, Indonesia and India, the region’s biggest rising democracies, both showed considerably lower scores than in 2016, with both countries moving down in rank. India, which used to be in 32nd place, slipped to 42nd place in 2017, and Indonesia, formerly in 48th place, dropped down to 68th for the year. In Indonesia, democracy suffered a blow after the governor of Jakarta, the country’s capital, faced allegations of blasphemy and was arrested. Governor Basuki Tjahaja Purnama (aka Ahok) is a member of a minor community.  On the other hand, in India, conservative religious ideologies have been on the rise, leading to violence and vigilantism aimed against minorities, especially Muslims, but also toward other voices raised in dissent.

Director for Asia at The EIU, Duncan Innes-Ker, noted that “It was a year of democratic backsliding for Asia, and the most disappointing performance since 2010-11 in the aftermath of the global economic and financial crash. The main regressive trends were a consolidation of power by key leaders in the region and increasing intolerance of minorities and of freedom of expression in some places.”

The occurrence of leaders solidifying their power in Asia has been seen in different countries such as Japan (23rd place), the Philippines (51st place) and China (139th place).  President Xi Jinping of China wrote “Xi Jinping Thought on Socialism with Chinese Characteristics for a New Era” which was included in the Chinese Communist Party’s constitution, making the leader even more powerful. Japanese Prime Minister Shinzo Abe was elected by a landslide for his fourth term, and his Liberal Democratic Party (LDP), is very much the legislative majority in the country. In the Philippines, President Rodrigo Duterte declared Martial Law for an indefinite period in Mindanao, the country’s biggest island and southernmost region.

This year’s EIU Democracy Index’s special feature on the freedom of expression and media, “Free Speech Under Attack” shows that, of the 167 countries in the index, only 30 qualify as “fully free.” This figure represents 11 percent of people in the world. 40 countries can be classified as “partly free,” making up 34.2 percent of the world’s population. In the study’s Media Freedom Index, 97 countries are classified as “largely unfree.” In Asia, the average score on the Media Freedom Index is 5.5, and the average rank is 79.4.