Relationships Singaporean 16-year-old boy asks for help in dealing with his 'helicopter mom'...

His “helicopter mom” insists on having a say in everything in his life. His problems include her “trying to restrict everything” from what he wears to how long he uses his phone or laptop and everything else in between.

SINGAPORE — One 16-year-old boy took to r/SingaporeRaw recently to ask for advice about his “helicopter mom” who insists on having a say in everything in his life. His problems with her include her “trying to restrict everything,” including when and how long he uses his phone or laptop.

The young man wrote that his mom insists that he use the hair dryer even when they’re just staying home and that he can’t even choose his own clothes and must approve of what he wears “since im her son I represent her and must dress what she thinks is good… often times making me look like an absolute idiot while at it, such as making me wear a long sleeved button down shirt with formal-ish trousers, to meet my friends at the neighbourhood mall.”

“Then anything she get upset about she starts shouting and losing her cool then blames me for not considering her feelings – before I even get to say anything,” the teen wrote, adding that his mum “threatens to cut of my contact with my friends and stuff if she isn’t happy.”

What’s also hard for him is his friends are fond of his mum “because she’s always super nice to them and helpful, so they’d probably think that I’m the crazy one if I bring this up.”

Also, since the teen does not attend a mainstream school, he’s home most of the time, which means he spends much time with his mother.

Even when he speaks to her “very calmly and civilized,” he claims she gets aggressive and starts screaming at him. Sometimes his father even has to mediate between them when they argue.

On his difficulties with his mom, he asked, “What am I supposed to do about this-? I need to hear some of your opinions.”

Judging from the comments on the post, the young man’s situation appears not uncommon.

“my mother also like this but not this level of extreme variant try to have your father intervening in some of these restrictions?,” suggested one Reddit user.

Others encouraged him to hang in there.

“jiayous brother. will get better when you get older. mb the only thing u can do now is promise urself that ull never raise your kids the same way…” a Redditor chimed in. 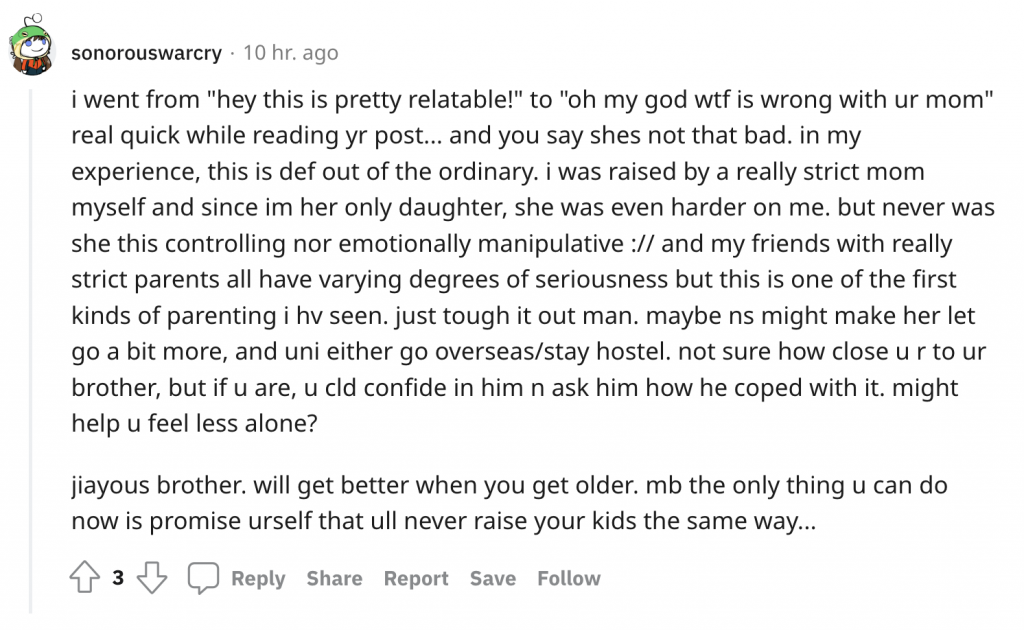 Another told him, “Save your money from NS and rent a room outside as soon as you can.”

In answer to one comment, the teen wrote that he “still really” loves his mum and appreciates the good things that she’s done. 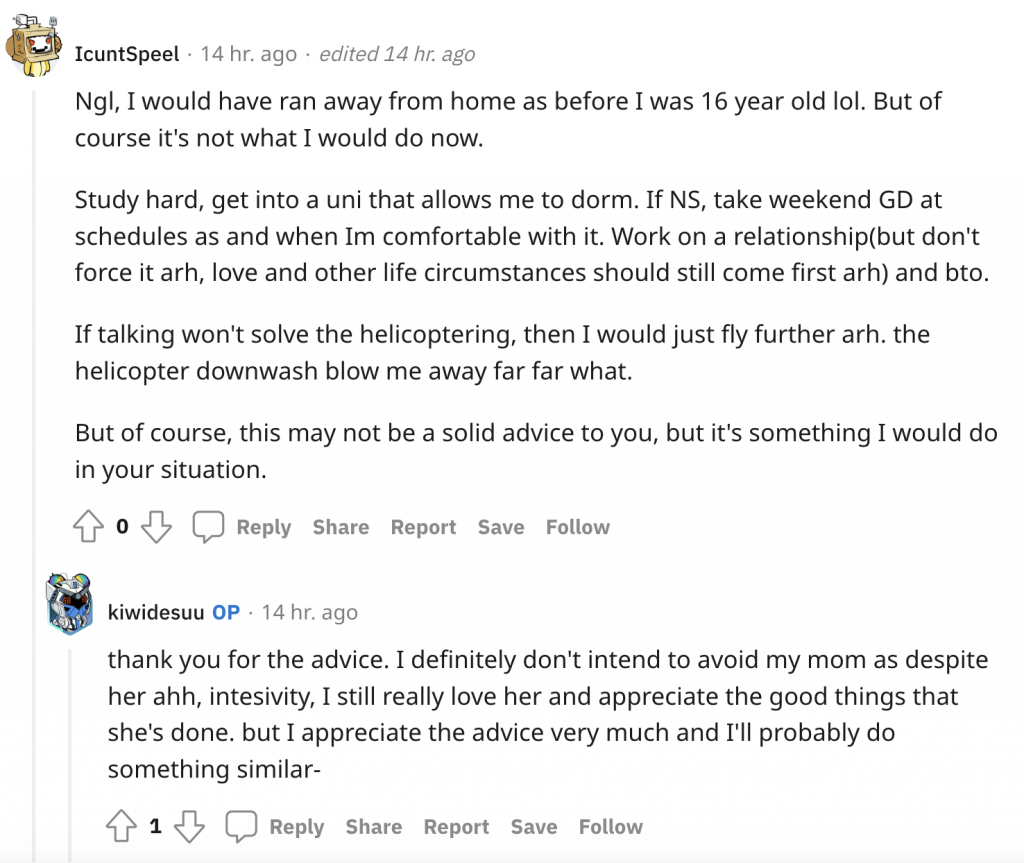 Adolescence is a time when teens assert their independence more and more, but it can be tough when parents continue to treat them like children. /TISG

‘This is called parenting’: Netizens slam person who took a video of a mum smacking toddler for ‘almost 30 mins’ at Hougang pool