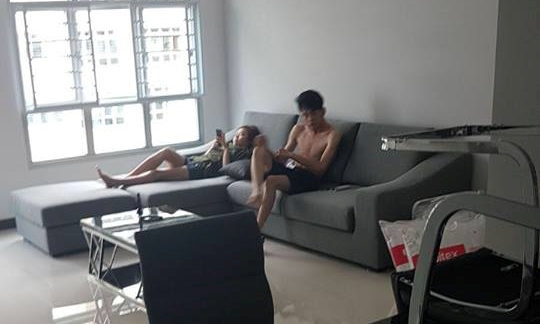 Facebook user Joanne LZH publicly shamed her adulterous husband who was apparently having an affair with his brother’s wife, through a post on her page today.

Joanne appears to have been married to her husband since February this year. The two seem to have been together for 5-6 years before getting hitched and seem to have shared a tumultuous relationship, with Joanne alleging that her husband previously cheated on her with her former best friend and accusing her husband of laying hands on her.

Her post has gone viral on the social media site, with many applauding her for her hilarious play-by-play commentary of what happened when she caught her husband and sister-in-law together.

Look what Pokemon laoniang caught this morning. 6th sense told me to wake the fuck up and go to the new house. Guess what I saw, two of them laying on the sofa so close together and got really ganjiong when they saw me. That woman was his 15 YEARS OF BROTHER’S WIFE. Well. Laoniang didn’t caught them in action but…

Fact 1: This guy haven’t been behaving well for the past 6mths or so. (Literally every time I call him he’d be with her and her husband. “Who knows whether what he said was true”)

Fact 2: This girl MC/LEAVE/PONTEN from work today without the husband knowing. (She say it’s the first time she ponten asked her to call her office HR to confirm how many days of leave or mc she took to prove but she didn’t want to I think scared husband know she ponten many times.)

Fact 3: I went over to pull her jacket which she wasn’t wearing (covering only). She vehhh ganjiong siol…

Fact 4: She was wearing spaghetti top and the position she was laying, wowsie her boobs were about to flop out and the bra seemingly unbuckled. IM A GIRL I KNOW HOW A BRA LOOKS LIKE HALF HANGING.

Fact 5: My husband was half naked (okay well, half naked was not a big deal but I just wanna add on to the list)

Fact 6: This guy’s clothes reeked of her perfume smell. So you tell me y’all never cuddle will have the smell uh? Wowsie the perfume brand so power I need to buy also.

Fact 7: They were sitting really closely tgt SUMPA. My eyes don’t lie and I LZH will never ever fabricate things up.

Fact 8: Didn’t allow me to check his phone because maybe too many private stuff.

Fact 9: And this woman can still so self righteous say she never do anything wrong. WOWSIE.

Fact 10: She was laying on the sofa the whole time (probably because of the unbuckled bra)

This guy violently held me and don’t allow me to leave the crime scene. And he tried to kiss me and all which I gave in because I need to play my mediacorp role so as to let him feel that I’ve forgiven him to breakfree from the house. SOMEONE GIVE ME A TROPHY THANKS.

For all of those who know me. I gave him a lot of freedom I don’t even care who he hangs out with what he does outside. I trust him with all of my heart even thou he cheated on me with my bestf before. Even when he lay hands on me and stuff like that I just KPKB and move on because I’m cool as fuck.

Poor me, of all that I’ve suffered after abortion just weeks ago. Let me found out this kind of drama.

What sucks was that I didn’t manage to take a proper pic of them sitting real close. Well. Y’all decide.