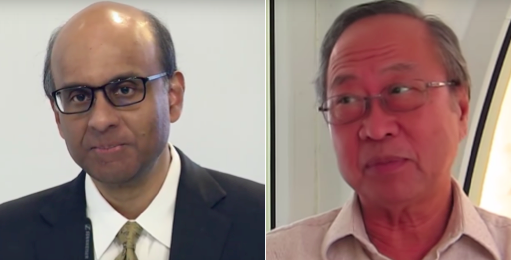 Senior Minister Tharman Shanmugaratnam on Thursday (October 17) received the Distinguished Leadership and Service Award by the US-based Institute of International Finance (IIF). In light of this, he received high praise from Secretary General of the Progress Singapore Party (PSP) Dr Tan Cheng Bock.

Mr Tharman, who is also Coordinating Minister for Social Policies, received the award “in recognition of his contributions to global financial governance and public service”, said the Prime Minister’s Office in a media release.

Dr Tan extended his congratulations to SM Tharman and wrote, “I have seen him at work, up close, in the earlier days of his parliamentary career and have found him to be insightful, honest and kind”.

In 2017, Dr Tan said that Mr Tharman Shanmugaratnam is the best person to be the next Prime Minister of Singapore.

During a speech he delivered for a local think-tank, Future of Singapore, Dr Tan said that several people had expressed to him their concerns about who the next Prime Minister of Singapore might be.

He added that he had worked with Mr Tharman on several projects and knows first hand that he is a very capable person whose heart is in the right place. Dr Tan however noted that Mr Tharman lacked the ‘killer instinct’.

After serving as Deputy Prime Minister for eight years, SM Tharman was appointed Senior Minister of Singapore on 1 May 2019. He is also the Coordinating Minister for Social Policies. /TISGFollow us on Social Media