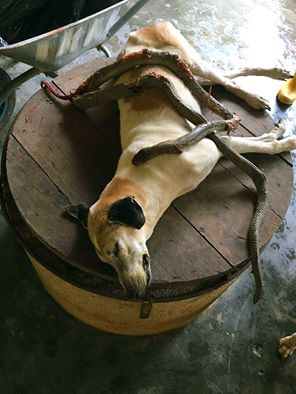 Alva, a 12-year-old dog sacrificed herself to save other humans and canines in an animal sanctuary from an eight-foot long cobra in Johore Bahru (JB), Malaysia.
Noah’s Ark CARES which shared the heroic death of Alva in their Facebook said that the Alva was rescued together with other dogs during the 2007 flood in JB. She was three years old when she entered the animal sanctuary.
Noah’s Ark CARES which remembered Alva as “Our Sanctuary Heroine” said “she was a real fighter till the end and let us remember her for this.”
Noah’s Ark CARES was founded by a former flight steward and dog groomer, Raymund Wee in 1995. It started as a boarding kennel that soon became a place of refuge for a hundred animals in a remote corner of North-east Singapore.
Eventually, Raymund sold his Singapore-based business and used the proceeds plus his own savings to establish Noah’s Ark CARES and its own animal sanctuary. It didn’t take long before the sanctuary was over-run with dogs and cats of all shapes and sizes, many three-legged, one-eyed as well as older animals plagued with arthritis.
In March 2000, Raymund made the difficult decision to leave his home and family to relocate the sanctuary to Johor, Malaysia, as land and running costs were more affordable.
Today, Noah’s Ark CARES sanctuary has more than a thousand animals, including horses, living there. Most of these animals are free to roam over the several acres of land in the sanctuaryFollow us on Social Media