SDP baying for a bout 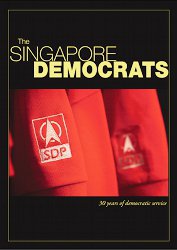 In a post undersigned by party vice-chairman John Tan, it said that the Straits Times reported last week that Sigma Elevator, a lift company, had been banned from tendering for new HDB projects since October 2015 because of poor performance of its lifts.

But after a spate of serious lift malfunctions that resulted in severe injuries and even one death, it faulted Minister for National Development Lawrence Wong did not reveal this fact.

In October 2015, an elderly woman’s hand was cut off when a lift door malfunctioned. Then, MP for the ward, Mr Tharman Shanmugaratnam, called for safety standards in lifts to be raised and a strong system of auditing for regular checks on lifts by maintenance contractors but that, Mr Wong had remained silent.

In January 2016, the doors of a lift remained open as the elevator continued to move. In March, another lift shot up 17 floors because of faulty brakes.

It was only in March 2016 that Mr Wong indicated that the Building and Construction Authority (BCA) would step up checks of lifts saying “we want to be thorough in our checks and cannot compromise on safety”.

Even after this assurance, more lift mishaps resulting in one elderly man’s death and a woman fracturing her spine occurred. Several lifts have also either functioned in a dangerous manner or have completely broken down. Again, no mention of the Sigma problem by Mr Wong.

It is now discovered that more than half the reported cases of major lift incidents in 2015 and 2016 involved Sigma as a manufacturer or maintenance contractor. Many of these incidents involved lifts that were both old and new.

It called on Mr Wong to answer two sets of questions:

One, did he know about the ban on Sigma Elevator in October 2015 ? If he did, why did he not inform the public about it and that Sigma lifts were responsible for the accidents? Why did he not order an overhaul of the company’s lifts to ensure that they were safe for use?

Two, if he did not know about the ban, why not? How does the Minister ensure the public’s safety when he was not aware of such a grave development?

It is important that the Minister fully explains to the public what exactly took place and why the omission.Follow us on Social Media