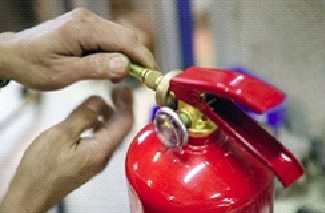 The following is a media release by SCDF.

—
The Singapore Civil Defence Force (SCDF) has received public feedback about companies claiming to be endorsed by the SCDF to sell fire extinguishers and/ or first aid kits. In some cases, insistent ‘hard-sell’ techniques were used to get the public to purchase their products. Sales personnel were also reported to be wearing lanyards to give the impression that they were representatives from a government organisation.

It is a standard procedure for SCDF personnel on official duties to display their warrant card, NS Identity Card or letter of authorisation, as proof of authentication. SCDF personnel will not compel residents to purchase fire extinguishers and first aid kits for their households. While it is encouraged for each household to be equipped with a fire extinguisher and first aid kit, it is not mandatory and residents will not be fined by SCDF for not having these items at home.

Members of the public are advised to lodge a police report for cases involving the impersonation of SCDF officers or unauthorised business activities.

Individuals who wish to file a complaint against such companies can call CASE’s hotline 6100-0315 for assistance. They can also file an online complaint via CASE’s website at https://www.case.org.sg/complaint.aspx or walk in to CASE’s office located at 170 Ghim Moh Road.Follow us on Social Media