A customer has expressed concern over quality control and food safety with the snacks sold by Garrett Popcorn after her husband allegedly bit into a rusty metal screw while indulging in gourmet popcorn from the new Garrett Popcorn store at Raffles City.

Facebook user Adeline Toh shared her experience on Facebook last Friday (13 Sept). According to the photos of a receipt and doctor’s note she shared, the incident occurred at the beginning of August.

Sharing a picture of a metal screw in the palm of a hand, Ms Toh wrote: “look what my husband found while indulging in his gourmet popcorn snack from Garrett – A METAL SCREW! We had gone to the new Garrett Popcorn store at Raffles City and bought a mix of cheese and macadamia caramel corn.

Ms Toh continued: “We really thank God that my husband decided to spit it out instead of swallowing it – imagine what could have happened if he had swallowed the METAL SCREW!!! Even then, he had to get a tetanus shot from the doctor and had to get his teeth checked in case of fractured tooth since he bit down quite hard on it.”

She added: “Just imagine if it had been a young child or an old person instead…Super super disappointed in Garrett Popcorn – with all the food poisoning cases being reported in the media recently, please please please double check your food before putting it into your mouth!!”

The doctor’s letter dated 24 Aug, that Ms Toh shared as proof that her husband had to seek medical advice after the incident, revealed that her husband sought treatment for fever on 3 Aug 2019. The letter stated:

“He was concerned as he had almost ingested a rusty nail found in his food prior to this. Examination was unremarkable, and no fever was detected at the apparent time (the patient had taken paracetamol, an anti-pyretic, prior to consultation).

“I gave him a booster vaccination against tetanus, diphtheria, and pertussis during the visit, with advice to monitor his symptoms. He has not had to return to the clinic since 3rd August 2019.”

In the comments section of her post, Ms Toh revealed that she is highlighting the incident on social media more than a month after the incident occurred since Garrett Popcorn allegedly failed to take the matter seriously: 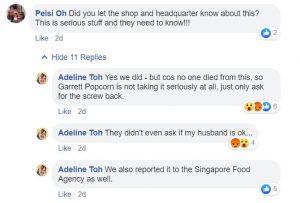