Cambodian political analyst Leap Chanthavy has accused Singapore Prime Minister Lee Hsien Loong of being disrespectful to the victims of the Khmer Rouge, in an op-ed published yesterday (3 June).

The Khmer Rouge refers to the followers of the Communist Party of Kampuchea (CPK) and the regime through which the CPK ruled in Cambodia between 1975 and 1979. The Khmer Rouge army was slowly built up in the jungles of Eastern Cambodia during the late 1960s, supported by the North Vietnamese army, the Viet Cong and the Pathet Lao.

Despite a massive American bombing campaign against them, the Khmer Rouge won the Cambodian Civil War when in 1975 they captured the Cambodian capital and overthrew the government of the Khmer Republic.

Following their victory, the Khmer Rouge – led by Pol Pot and others – immediately set about forcibly evacuating the country’s major cities. The regime murdered hundreds of thousands of their perceived political opponents. Ultimately, the Cambodian genocide led to the deaths of 1.5 to 3 million people, around 25 per cent of Cambodia’s population.

PM Lee drew criticism from Leap Chanthavy after he published a Facebook post on Friday (31 May). The post described a letter PM Lee had sent to his Thai counterpart to express his condolences on the passing of former Thai PM General Prem Tinsulanonda.

In the post, PM Lee mentioned the Khmer Rouge. He wrote, in part: “His leadership also benefited the region. His time as PM coincided with the ASEAN members (then five of us) coming together to oppose Vietnam’s invasion of Cambodia and the Cambodian government that replaced the Khmer Rouge. Thailand was on the frontline, facing Vietnamese forces across its border with Cambodia. 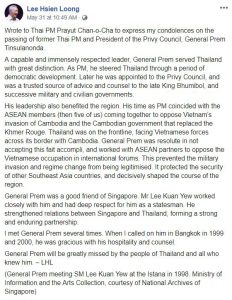 In an opinion piece published by Cambodian publication, Khmer Times – a major regional publication – Leap Chanthavy wrote: “What is striking is his view in denouncing the regime change that toppled the Khmer Rouge and denying legitimacy of the new Cambodian government that saved lives of the remaining four million Cambodians with support from the Vietnamese forces.”

Calling such a view “nothing but being disrespectful to the Khmer Rouge victims and those who sacrificed their lives in deposing the genocidal regime of Khmer Rouge,” the political analyst asserted that PM Lee may have inherited this view from his father, founding PM Lee Kuan Yew.

Asserting that the late Lee Kuan Yew was “resolutely against the Vietnamese intervention,” Leap Chanthavy claimed that Singapore “has never denounced auto-genocide conducted by the Pol Pot regime”.

He further alleged that Singapore “recognised the rogue state and killing machine” and “was the first Southeast Asian country that offered to provide military assistance to guerrilla forces to fight against Heng Samrin’s regime.”

Asserting that Singapore only cared about “its own selective peace or that of the old five ASEAN members that Singapore tends to mention quite often recently by ignoring the other half of Southeast Asia which was put into bloodshed in those war times,” the Phnom Penh-based commentator declared:

“After all these forty years, the gut to mention about Singapore’s bravery in denying the toppling of Pol Pot’s regime is nothing but a complete disrespect to lives and souls of Cambodian peoples.

“The comment made by Lee Hsien Loong touched deeply on Cambodian wound by stirring the memory when the self-acclaimed high moral Singaporean government has never denounced auto-genocide conducted by the Khmer Rouge.

“Cambodian people can forgive but we can never forget our difficult times and we know clearly who were our friends in need. Singapore was not one of those.”

Inviting Singapore leaders to visit the Toul Sleng Genocide Museum Archives and the Cheung Ek mass graves and killing field “if they still think that genocide was a fabrication,” Leap Chanthavy concluded that PM Lee’s comment “reignited pain of Cambodian people and questioned moral responsibility and sensibility of a statesman towards millions of lives of Cambodian peoples.”

He also urged Singaporean leaders to remember that Cambodia is among the ten ASEAN nations. Read his article in full here.