Singapore—Twenty-one foreign workers who have been locked in a single room since Friday (Apr 17) because of fears of coronavirus spread were rescued by police on Tuesday night (Apr 21), said migrant workers’ group Transient Workers Count Too (TWC2).The group had brought the workers’ plight to the police’s attention.

After news that the 21 individuals had been locked up was published, the police went to the Joylicious dorm at Tuas and opened the room where the men had been locked.

The NGO said in a Facebook post shortly past 1:00 pm on Tuesday that they had gotten a distress call from the dormitory. Ever since a Chinese worker had been diagnosed with Covid-19 on April 17, the workers had been locked in their room with the door locked from the outside.

If any of the workers needed to use the bathroom, they had to call the guards to let them out, but at times it would take half an hour for the guards to come.

TWC2 wrote, “This is an unacceptable and dangerous way to do things. What if a fire breaks out in the block? How will the 21 men escape?”

In the two videos sent by the men, one showed one worker attempting to open the door, which was locked, and another showed how crowded the room was, the NGO said. 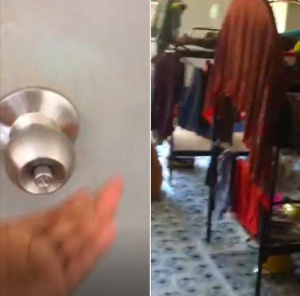 Around four hours later TWC2 posted an update, saying the men had been moved to another room in the storey below, “a bigger room…with an attached bathroom.”

However, the update said the door was still locked.

Furthermore, the NGO added that the workers were saying the “boss” would hunt down the whistle blower. “Punishment and retribution is likely to follow. We need the media and govt authorities to protect them.”

TWC2 posted a photo of the door of the workers’ new room.

We've had a follow-up report from the guys in Joylicious. They are now in a different, bigger room one floor down, with…

In a third update later that night, TWC2 wrote that the police had come and had opened the door. “At last, a positive note from the guys in Joylicious dorm. The police came and the door was opened. Now, the door is left open and they get fresh air. Hope it stays that way.”

Media outfit Coconuts reported that the dorm is under Joylicious Management Pte Ltd and that this company is not included among the licensed dormitory operators from the  Ministry of Manpower.

Angry netizens called for the dormitory operators to be held accountable. 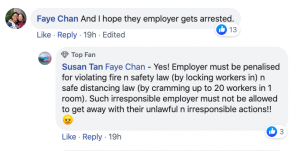