The Independent Singapore News
Home News Featured News PM Lee calls for dissolution of parliament and the issuance of the... 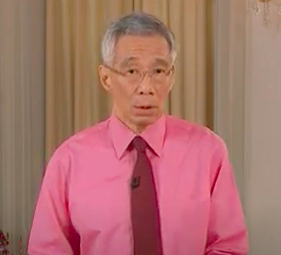 Explaining his decision for calling elections in Singapore during an impromptu address on Tuesday (23), Prime Minister Lee Hsien Loong added that he visited President Halimah Yacob in order to advise her to dissolve parliament and issue the Writ of Election.

He added that the govt has made strenuous efforts to care for migrant workers and that the Covid-19 numbers have been brought down to one.

“We are now in a stable position”, he added.

“Life can now become more normal than it was during the circuit breaker”.

Calling it the end of the beginning phase, PM Lee said that Covid-19 will be with us for at least another year, or probably longer. We have to continue keeping a close watch on the situation, he added.

Asking Singapore to brace herself economically for a tough year ahead, PM Lee cautioned that there would be more business closures and retrenchments in the coming months.

Adding that the government was determined to save as many jobs as possible, and create new jobs, PM Lee said that they planned to weather the storm and pick up again once the sun came out.

Making reference to US-China tensions, now including Hong Kong, he said that in order to navigate foreign challenges, Singapore “must stand completely united, as one people”. Singaporeans and the government must stand together, he added.

He added that “An election now when things are relatively stable will clear the deck and give the new government a fresh four five year new mandate. It can focus on the difficult decisions”.

Adding that the alternative is to wait out the Covid-19 pandemic, PM Lee added that there is no assurance it will be over before this government’s term ends in April.

He also said that he needed to be sure that voters can vote safely and political parties campaign safely and that both of these can be done.

PM Lee cited South Korea and Taiwan as examples of countries that had also held elections during the Covid-19 period.

Emphasising that the government will still continue to govern, PM Lee said that this was especially so during this Covid-19 period.

“The government that you elect will have critical decisions to make. These decisions will shape your livelihood far beyond the five-year term”.

“I have every confidence that you will think carefully and vote wisely to secure our lives and our future” he urged Singaporeans. /TISG