OPINION | Football hooliganism continues to be wild in Indonesia “Indonesia rowdy culture” will never change... Even you play in an empty stadium, there will be hundreds of fans waiting outside to incite violence for their own benefit. They are more than fanatical and finds strange thrills in hooliganism.” — Malek Awab

The global world of football is still shaking heads in disbelief over the death of more than 200 fans in Saturday’s worst-ever outbreak of hooliganism in the Indonesian city of Malang in East Java.

Police in the East Java province said thousands Arema FC fans stormed the pitch at Kanjuruhan Stadium after their team lost 3-2 to Persebaya Surabaya. Officers tried to control the “riots” by firing tear gas, triggering a stampede as panicked fans rushed to an exit gate. Some suffocated in the chaos, while others were trampled to death.

Even Indonesian President Joko Widodo ordered an investigation of security procedures, and the President of FIFA (the world football controlling body) called the deaths “a dark day for all involved in football and a tragedy beyond comprehension.”

“This keeps happening,” said President Widodo in remarks to the press. “There needs to be a firm commitment from all parties that this will not be repeated.”

The investigations would aim to work out what happened and identify the perpetrators. Sadly, at least 17 children were among the dead and seven children were injured and treated in hospitals, the authorities say.

He expressed his deep condolences for the dead in televised comments on Sunday. He said: ‘I deeply regret this tragedy and I hope this is the last football tragedy in this country. Don’t let another human tragedy like this happen in the future. We must continue to maintain sportsmanship, humanity, and a sense of brotherhood in the Indonesian nation.”

Former Singapore-based coach Robert Alberts of Home United-fame, now with Persib Bandung, pleaded for stricter control, although he knows it’s close to a pipe dream with Indonesia now ranked probably as the world’s most violent place to watch football.

“Since I’ve been here, my players even travel in armoured police vehicles for away matches,” he says. “It’s almost like a sports lifestyle, but that’s critical to safeguard their personal interests.”

He added: “Look at the weekend match. How can they allow spectators to climb over fences and enter the field of play and create riotous scenes? Only police were there on the field, minus the club officials, and they had to use tear gas to protect themselves. It’s inevitable, and there will be plenty of fingers pointing everywhere. The big question: Who will now take responsibility for this unimaginable fracas.” Strangely, the violence, off and on the pitch, also can give young men a sense of belonging. Increasingly, however, the violence seems to be driven by thugs enjoying hooliganism. “This is not about football anymore,” said Jakarta-based journalist Ahmad Itham. “In my opinion, they are just criminals.”

Singapore’s ‘Coach of the Year’ Jita Singh, who had a couple of stints in Indonesia, shakes his head as he analyses the weekend’s riots. “It’s the temperamental style of the crowds who cannot accept defeat, let alone controversial decisions by the referee,” he says. “So they turn to charging into the field to get the match abandoned or to cause a hooligan scenario.”

The disaster began after Arema was beaten, the first time they had lost on home turf in 23 years. As fans rushed onto the pitch, police fired tear gas, prompting panicked supporters to rush for the exit gates.

Ramli Jaafar, who was at the match, told Al Jazeera newspaper he saw “children die in front of his eyes” as people struggled to get away from the tear gas. He added: “People were scattered and running around trying to get out,” he said. “But the exit was locked, and we were piling up there.”

The match was a sell-out with at least 42,000 people in the stadium, even though Persebaya Surabaya fans were banned from the game because of the intense rivalry between the two teams in the east of densely-populated Java island.

FIFA President Gianni Infantino told Reuters the football world was “in a state of shock” over what had happened. FIFA, which prohibits the use of tear gas in stadiums, has asked Indonesian authorities for a report on the tragedy.

“No one should lose their lives at a football match,” he added. “We call on the Indonesian authorities to conduct a swift, thorough and independent investigation into the use of tear gas at the stadium and ensure that those who are found to have committed violations are tried in open court and do not merely receive internal or administrative sanctions.”

Football is hugely popular, if not fanatical, in Indonesia, and as a journalist with three decades of experience, I’ve personally experienced the rowdy behaviour of fans from Jakarta to Medan, Bali, and Surabaya. The majority come on their motorcycles, their famous mode of transport, and several even without match tickets, but somehow squeeze their way in.

Former Malaysia’s sports editor of the New Straits Times Lazarus Rok said: “The tragic incident that happened, as sad and shocking as it was to the football world, was a tragedy that was waiting to happen in the realm of Indonesian football.

“For years, deaths have followed in the wake of hooliganism in Indonesian football, though not as devastating as this one. One would have thought that the football authorities would have seen the ominous signs and scrambled to the safety of its stakeholders. Perhaps, now that the President of Indonesia himself has ordered for safety reviews, football will no longer be a ‘dangerous’ sport in Indonesia.”

Singapore’s icon midfielder of the 1980s Malek Awab, who coached there with Fandi Ahmad, believes the “Indonesia rowdy culture” will never change. He says: “Even you play in an empty stadium, there will be hundreds of fans waiting outside to incite violence for their own benefit. They are more than fanatical and finds strange thrills in hooliganism.”

Witnesses said some 42,000 Arema fans threw bottles and other objects at players and officials. At least five police vehicles were toppled and set ablaze outside the stadium. In the prolonged emergency, riot police trying to stop the violence fired tear gas, including toward the spectator stands, and triggered the disastrous crush of fans making a panicked, chaotic run for the exits.

President Widodo ordered the premier football league suspended until safety is re-evaluated and security is tightened. Indonesia’s football association has also banned Arema from hosting matches for the rest of the season.

He also revealed that police are investigating 18 officers responsible for firing tear gas as well as security managers, ranging from middle- to high-ranking officers. Police are also questioning witnesses while analysing footage from 32 security cameras inside and outside the stadium and nine mobile phones owned by the victims, as part of the investigation to identify suspected vandals.

Saturday’s game was among the world’s worst crowd disasters in sports, including the 1996 World Cup qualifier between Guatemala and Costa Rica in Guatemala City, where over 80 died and over 100 more were injured. In April 2001, more than 40 people are crushed to death during a match at Ellis Park in Johannesburg, South Africa.

Former Singapore youth team manager George Abraham bluntly summed it as “really terrible”. He said: “The organisers appear to be very irresponsible. Surely they could’ve anticipated the highly charged emotions of the two most popular Indonesian clubs. I firmly believe tear gas should not be deployed in a confined space. It should only be used when other methods have failed.”

Let’s hope the weekend’s crowd violence will be a long-overdue wake-up call. Akhmad Hadian Lukita, the president of PT Liga Indonesia Baru (LIB), told Reuters: “We are concerned and deeply regret this incident. We share our condolences and hopefully, this will be a valuable lesson for all of us.” 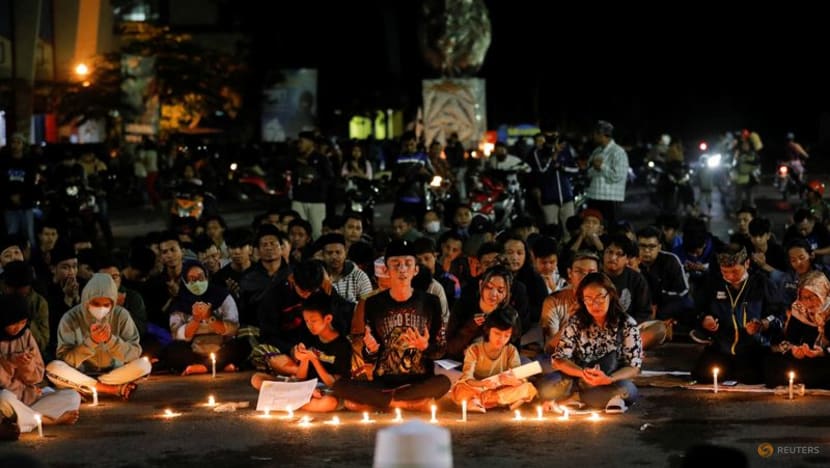 For the record, Indonesia is due to host the 2023 Fifa Under-20 World Cup from May 20 to June 11, with 24 participating teams. As the host, the country automatically qualifies for the cup.

Suresh Nair is a veteran Singapore-based journalist with over three decades of editorial experience. He has covered countless football matches in Indonesia and sometimes wonders when the spate of sports hooliganism will ever end.