NSF who died of heatstroke was inaccurately assessed and inadequately treated: COI reveals 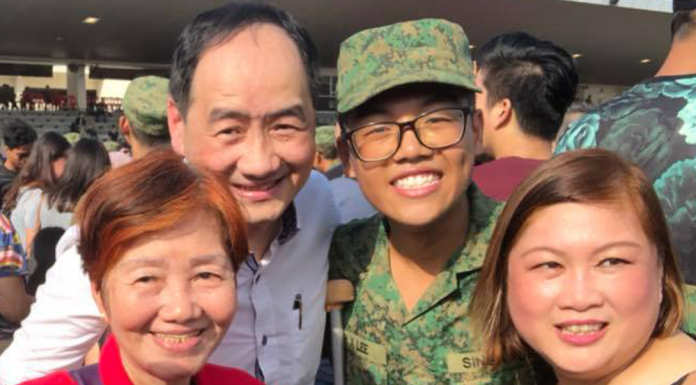 Defence Minister Ng Eng Hen revealed the preliminary findings of the Committee of Inquiry (COI) that was convened to investigate the death of national serviceman Dave Lee, who died due to heatstroke on 30 April 2018.

Private Dave Lee Han Xuan, was conveyed to Changi General Hospital (CGH) on 18 April after an 8km fast march at Bedok Camp. The Guardsman from the 1st Battalion Singapore Guards fell into a coma and spent 12 days at CGH’s Intensive Care Unit as his condition worsened, before he passed away at 5.32pm on Monday, a mere 10 days after his 19th birthday.

Following Private Lee’s untimely passing, the army confirmed that the late NSF will be accorded a military funeral and will be awarded the Guards and Recon military tabs, as well as the Guards beret he had been training for. Private Lee also received posthumous recognition of the rank of Corporal First Class (CFC).

A COI was also convened and granted full powers and access to both information and personnel during its investigation so that it can uncover the contributing factors that led to CFC Lee’s death and outline recommendations to correct any lapses if any come to light.

That COI has now identified training lapses and inadequate casualty management in its report highlighting the preliminary findings of its probe. The COI declined to mention the names of the personnel who were involved since a separate police investigation is ongoing.

Minister Ng revealed that training lapses occurred from 17 April onwards, with Lee being made to run six 400m-laps, around 3.30pm that day, at a pace faster than his running ability for the first three laps. The rest time between laps was also shorter than what was prescribed in the lesson plan by 45 seconds.

That night, around 9.45pm, Lee’s platoon was punished for “perceived lack of teamwork and use of mobile phones after Lights Out” and were made to do “Bear Crawls, Sprints, Leopard Crawls, as well as Push-Ups and Crunches” that lasted for up to 30 – 35 minutes.

This informal punishment was unauthorised. It also interrupted the seven hours of uninterrupted rest that is stipulated for all soldiers to take after physical exertion.

The platoon was eventually instructed to wash up and sleep at 10.25pm. The Minister said that “less sleep could be one of the factors which caused CFC Lee to have more fatigue” and could have contributed to his heatstroke.

Minister Ng reported that all heat injury prevention measures as stipulated in the Training Safety Regulations (TSR) were adhered to, save for the decreased amount of rest. This includes a temperature-taking regime, hydration regime, ensuring adequate water supply, and the adherence to a work-rest cycle.

The soldiers were then tasked to an 8km fast march the next day. Minister Ng reported that Lee’s temperature was normal (36.3 degree celcius) prior to the march and his buddy observed that Lee was “looking well and seemed to be his usual self.”

After completing 6km of the 8km fast march, Lee stopped and complained to his commander that he had cramps in his calf muscles. Ng said that Lee’s commanders “advised him to stretch his calf muscles…and encouraged him to complete the march.”

Lee, who was the last to finish the 8km fast march, was spotted looking disoriented as he walked back to the company line. He was reportedly attended to by commanders and cover medics immediately.

The COI, however, found that Lee’s collapse was initially incorrectly assessed to be physical exhaustion and he was inadequately treated. It was only when his condition did not improve, that he was evacuated to Bedok Camp Medical Centre and administered two fast IV drips and underwent two cycles in the Body Cooling Unit.

This was a major lapse since full body cooling should have been administered as soon as heat stroke symptoms are present and not longer than 30 minutes after symptoms show.

Minister Ng noted the “significant gap between the onset of symptoms and [Lee’s] arrival at the medical centre.” Lee did not respond to treatment when he was subsequently evacuated to Changi General Hospital.

While it was not able to precisely pinpoint the cause of Lee’s heatstroke, the COI pointed to “accumulated fatigue, insufficient rest, Lee’s less than optimal state of health and his potential use of medication” as contributory factors. It added that the likely reasons for Lee succumbing to heat stroke were “inadequate on-site casualty management and delayed evacuation.”

Meanwhile, an SAF-commissioned External Review Panel on Heat Injury Management (ERPHIM) found that the Forces’ heat injury processes “aligned with prevalent industry and foreign military practices” in its probe. Despite finding the processes to be generally sound, ERPHIM highlighted areas of improvement and recommended changes, which MINDEF has pledged to adopt.

In the meantime, relevant personnel have been removed from command, pending the investigation.

Revealing that those found responsible will be punished, Minister Ng said that his ministry will “wait for the Attorney-General’s Chambers’ decision whether to prosecute any person in the criminal courts. If no criminal charges are filed, MINDEF will prosecute persons responsible for lapses in this incident in our military court.”