The passenger threatened the bus captain saying, "Do you believe that I'll make you lose your job?” He also spit at the bus driver and made rude hand gestures at him

Singapore—An extremely rude, not to mention dangerous, passenger made the news recently for not only spitting at a bus captain who had asked him to wear his mask properly, but yelled at him, “Do you believe that I’ll make you lose your job?”

And while SBS Transit has reported the incident to the police, netizens are saying the man must serve jail time and be given a fine for his behavior.

The incident was reported on Shin Min Daily News on Saturday, August 8, months into the coronavirus pandemic wherein everyone is required to wear a mask for their own, as well as for others’ safety.

A woman who witnessed the incident, which occurred on bus service 54 in Bishan, said that the bus captain went to the middle-aged passenger, who was seated in the back, several times to ask him to wear his mask properly.

But the man kept the mask under his chin.

The woman told Shin Min Daily News, “It was the third time that the man had been asked to wear his mask properly. The bus captain told him he’d have to get off the bus if he refused to comply with the rules.”

She added, “He did not respect fellow passengers or the bus captain and caused others’ journeys to be delayed.”

At one point, the recalcitrant passenger approached the front of the bus to argue with the bus captain. But the passenger finally stopped his harangue when the bus captain told him he would call the police.

The passenger then chose to get off of the bus, but not before threatening the bus captain by saying, “Do you believe that I’ll make you lose your job?”

He also spit at the bus driver and made rude hand gestures at him.

AsiaOne reports that SBS Transit will file a police report concerning the man, especially because of the current pandemic. The passenger was reportedly asked by the bus captain three times to put his mask on as he kept taking it off.

When he took his mask off the fourth time, the bus captain informed the company’s operations control centre, which is why the man came to the front of the bus.

“We do not take this incident lightly and will be filing a police report against the man for breaching current regulations and for verbally abusing our bus captain.  We will also be sharing the relevant CCTV footage with the police,” the company’s senior vice president of corporate communications is quoted in AsiaOne as saying.

She added, “Bus captains are front line staff who come into contact with many strangers every day and they, like many other frontline personnel, deserve better treatment.”

Incensed at the incident, netizens are calling for the passenger not only to be fined but to be jailed for his dangerous behavior. 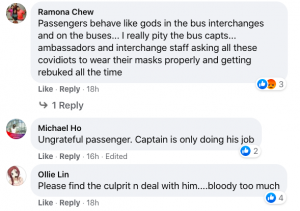