Home News My GF doesn’t want to work, she wants taitai life because her...

My GF doesn’t want to work, she wants taitai life because her father is rich & her mother got to be a housewife

The man said that they have no savings, even if he has been working for years, and that they are living from paycheck to paycheck.

A man took to social media to ask for advice concerning his girlfriend, whom he said not only refused to work but has been pressuring him to borrow money from his family.

“My girlfriend doesn’t want to work, and she hasn’t worked throughout our relationship. She wants the taitai life because her father is rich and her mother got to be a housewife,” his post on the NUS Whispers Facebook page began.

He also said that they have no savings, even if he has been working for years, and that they are living from paycheck to paycheck.

Thinking about being together longterm has made him feel this way:  I’m not sure if I can live like this forever.

When he considers the money needed for their BTO flat if they do end up together, he gets stressed.

His girlfriend, meanwhile, merely tells him to borrow money from his family as she can’t from hers since she has “never contributed to the family business.”

Moreover, the girlfriend does not even contribute to the housework as the man’s parents do all the chores.

“She just does nothing at home and watch her dramas. She doesn’t even offer to buy meals for my parents when they are at home.”

To cap it all off, the woman insists on a proposal complete with a diamond ring, which the man cannot afford.

“Otherwise she says it will make her look bad and she will not marry me, which is why I’m in a dilemma now. I feel that she doesn’t care about my financial pressures and she’s willing to make me suffer for what she wants.”

However, the man seems to have many insecurities, describing both himself and his girlfriend as “unattractive,” and expressing the fear that he won’t be able to find someone else of he breaks up with her.

“I’ve been wanting to lose weight but she insists I stay fat so I won’t attract other girls, but I am concerned about my health as well. What should I do?,” he wrote.

His post received over 300 comments, with netizens trying to set him straight. 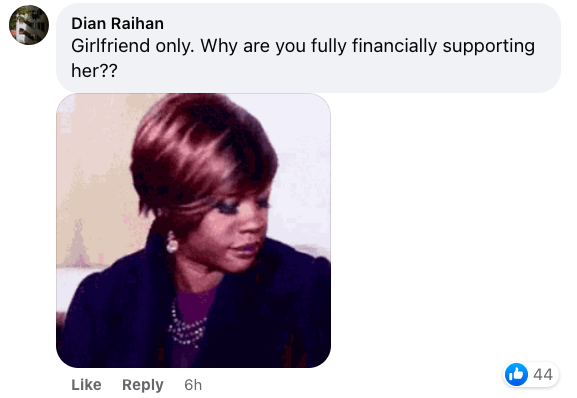 Others urged him to end things with the woman. My girlfriend shouted at me in front of my mother, saying ‘i don’t care about her, i’m a Mama’s Boy’ because I helped my mother to feel warm