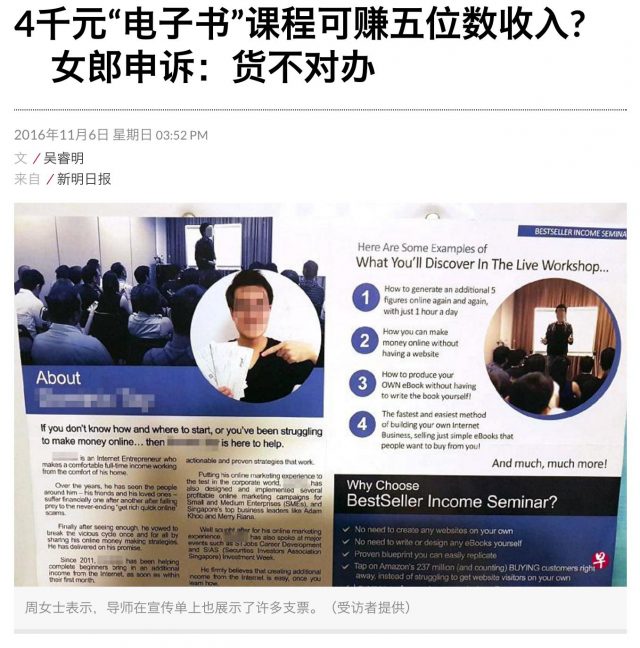 The Consumers’ Association of Singapore (CASE) has confirmed receiving more than 30 complaints since the beginning of this year against Digimatic Media Pte Ltd and Leverage Leap Pte Ltd. The complainants claim that they were made to spend between $2,000 and $5,000 for advanced courses conducted by the companies, but that the lecturers of such courses were ineffective. They claimed that mentors also become indifferent after receiving the money.

The prominent Internet Entrepreneur who is linked to both companies, describes himself as making “a comfortable full-time income working from the comfort of his home”.

The complainants alleged that they were coaxed into signing for the advanced courses after attending a free 3 hours preview seminars. They had to pay $2,000 to attend the 2-days advance course workshops. During the workshops, entrepreneur is said to upsell the participants to pay another $2,000 to be a part of his “inner circle” for more coaching.

The complainants said that what he taught was very different from what he claimed he would be teaching, and they also found that what he taught were impractical or ineffective techniques. When they failed to make any income from the ebooks, he simply dismissed them by saying their ebooks were lousy. They also complained that after he collected their money, he became indifferent to them.Follow us on Social Media