Wife was admitted to hospital, test result came up negative but the charge is more than S$300

Singapore — A woman who was unwell took a Covid-19 test that apparently cost more than S$300 in total. Her husband is now asking why the charge cannot be absorbed by the Government.

The couple had returned from a minor pilgrimage (umrah) when the wife felt unwell. She had a slight cough and fever.

They consulted a general practitioner who gave them a note advising them to visit the nearest hospital. They went to the Accident and Emergency (A&E) Department at the National University Hospital (NUH).

In a Facebook post on Monday (March 16), the man wrote that after his wife was admitted to the hospital and tested for Covid-19, the test result came up negative. 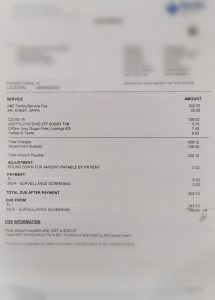 According to a copy of the invoice, the accident and emergency (A&E) charges came to about S$277, with the Covid-19 test costing S$159.

The man wrote: “My question is shouldn’t e test be free claimable to e government and not chargeable to us as we volunteer to go to e hospital to ensure that we are not e carrier of e Covid-19.”

Many were unclear about the breakdown of the medical bill but, after subsidies and deductions, the woman had to pay only S$143.10. 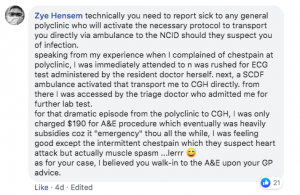 TISG has reached out to the Ministry of Health for comment and clarification. /TISGFollow us on Social Media