Man posing as ‘sharonliew86’ gets 3 weeks’ jail for racist tweets against Malays, Indians

Singapore—A Singaporean hiding behind the name “sharonliew86” on Twitter was given a three-week jail sentence for several racially offensive tweets he posted in 2019 and 2020.

Thirty-five-year-old Zainal Abidin Shaiful Bahari, a senior director of a computer software company, started the “sharonliew86” Twitter account with a couple of his friends nearly three years ago as a parody account of Singaporeans who are racially insensitive.

The account quickly gained thousands of followers. By early 2019, with his two friends no longer actively tweeting, Zainal became solely responsible for its post.

The tweets sent from the account caused Zainal to run afoul of the law, as their content grew to become more and more racially offensive.

In one such post, published in Oct 2019, “sharonliew86” alleged that Malay students’ academic prowess was inferior to their Chinese peers.

In March and April of 2020, he used a racial slur when referring to Indians in two posts.

In another post last year, Zainal made fun of the coloured dot which is worn on the forehead by some who practise Hinduism.

Law and Home Affairs Minister K Shanmugam even wrote in a Facebook post in May 2020 that “nasty posts” from the “sharonliew86” account had been written “deliberately to stoke anger, unhappiness (and) racial tensions”. 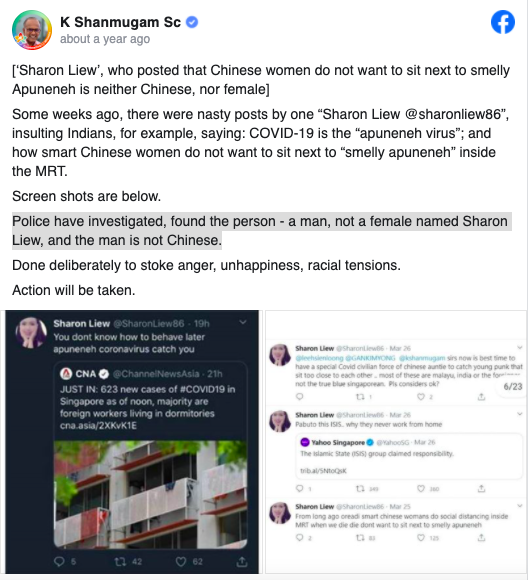 At The Time, the minister wrote That “Police have investigated, found the person – a man, not a female named Sharon Liew, and the man is not Chinese”.

On Tuesday (June 8), Zainal entered a guilty plea to two charges involving acts against racial harmony, with two additional charges of a similar nature also taken into consideration for his sentencing.

Deputy Public Prosecutor Senthilkumaran Sabapathy told Deputy Presiding Judge S Jennifer Marie that the tweets last year containing the racial slur against Indians had been posted as a response to the news of growing Covid-19 cases among migrant workers living in dormitories.

“The April 17 tweet was widely circulated on the internet… The accused took down the… tweet about 30 minutes after it was posted after realising that the tweet had gone viral and was getting substantial negative attention online from members of the public,” added the DPP.

In April last year, the police learned about Zainal’s racist tweets after a netizen reported the “sharonliew86” account, and his identity was determined by the officers from Bedok Police Division shortly afterwards.

Zainal was charged in court on July 2, 2020, after he admitted to the police that he was the author of the racially offensive tweets on the “sharonliew86” account.

The DPP asked that Zainal be jailed for at least four weeks, as his actions were “entirely typical of an ‘online troll’ who derives perverse entertainment by intentionally inflaming the emotions of others”.

He also said, “He was simply acting for his own amusement by intentionally provoking the racial feelings and emotions of others.”

But Zainal’s lawyer, Mr Sunil Sudheesan, claimed that his client is “sincerely contrite” and that he is not racist. Zainal had only tried to come off as humorous, but “overstepped the mark”.

The Attorney-General’s Chambers said in a statement on June 8 that the AGC takes a serious view of “words or conduct which wound the racial feelings of any person or prejudices our racial harmony and community relations”.