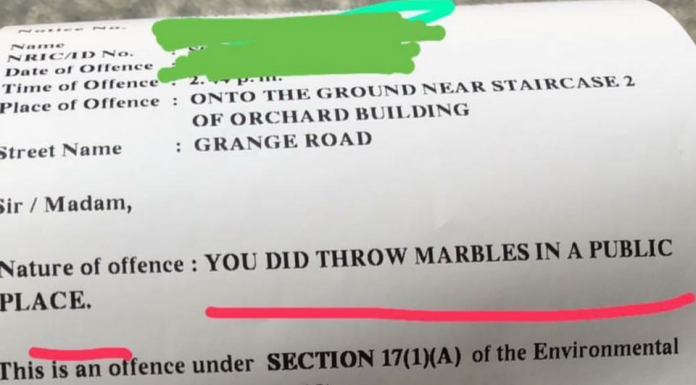 A man was allegedly fined $300 by the National Environment Agency (NEA) for throwing marbles in a public place.

Redditor u/TedMosbySexitecture shared a picture of the fine notice online. Although the date that the offence was committed was blanked out, it appears that the notice was issued fairly recently since the offender is asked to pay the fine by 12 Nov 2018.

The notice also shows that the offence occurred at the Orchard Building located at 1 Grange Road and that the offender threw marbles onto the ground near a staircase in the building.

The notice cites that throwing marbles in a public place is an offence under Section 17(1a) of the Environmental Public Health Act that is administered by the NEA. According to Singapore Statutes Online, the Section states that:

“No person shall deposit, drop, place or throw any dust, dirt, paper, ash, carcase, refuse, box, barrel, bale or any other article or thing in any public place.”

According to the redditor who shared a picture of the notice online, the offence was committed by a “friend’s friend”:

A quick browse through the Redditor’s post history shows that he has been concerned over whether the NEA will punish those who smoke within their own homes. He shared a picture of another netizen claiming that someone had been summoned after NEA cameras installed in residential estates caught the person smoking in their own bedroom.

The NEA has since debunked such claims as “fake news”. Reiterating that it is presently not unlawful to smoke within one’s own home, the statutory board revealed that the cameras that had been installed in HDB housing estates are meant to monitor killer litter.

https://theindependent.sg.sg/nea-confirms-it-installed-cameras-in-hdb-housing-estates-not-to-detect-smoking-but-for-high-rise-littering/Follow us on Social Media