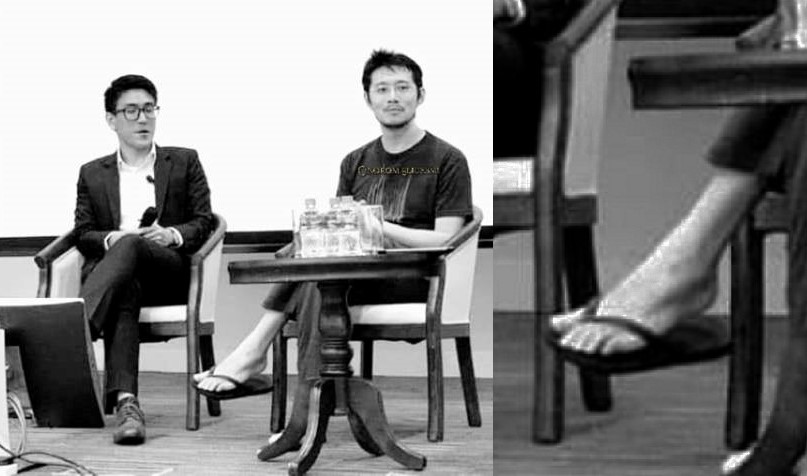 One of the grandson’s of Singapore founding Prime Minister, the late Lee Kuan Yew, Hongyi presently serves as deputy director of product and engineering at the Government Technology Agency of Singapore (GovTech).

This new photo, published on social media by Facebook user Cinorom Elicebmi this morning, shows Hongyi at a panel event. While the rest of the three panellists are wearing blazers, formal pants and covered shoes, Hongyi sits in sharp contrast in a t-shirt, casual pants and flip-flops:

Earlier, Hongyi was captured on camera wearing flip-flops instead of more formal, closed-toe footwear at a recent talk. This latest picture appears to have been taken at the same event.

Many netizens have pointed out that Hongyi’s slippers mirror what seems to be his mother’s preferred footwear – open-toed sandals. Despite widespread criticism that her sandals look “sloppy” especially at formal events where she meets world leaders with her husband, Hongyi’s mother has continued to wear open-toed sandals at functions in Singapore and abroad.

Meanwhile, netizens remain unimpressed with Hongyi’s footwear. The latest picture has drawn fresh criticism from netizens, who have hit out at Hongyi for dressing so unprofessionally: