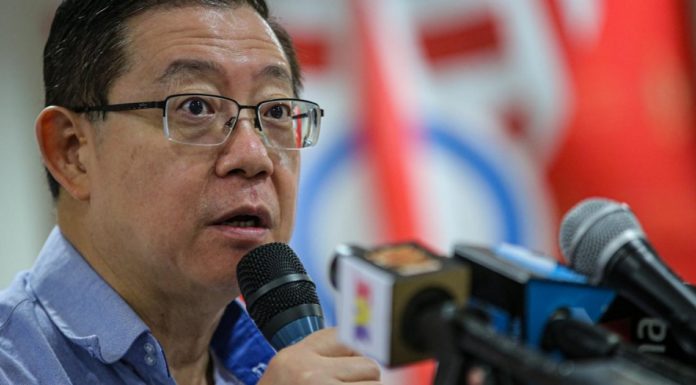 KUALA LUMPUR, Dec. 7 — DAP’s Lim Guan Eng has warned the government to expect more sovereign credit rating downgrades for Malaysia in the future if it does not accept that the country is in the midst of an economic and political crisis.

The recent revision of Malaysia’s sovereign credit rating by Fitch Ratings was primarily driven by the negative impact of the Covid-19 pandemic on the country’s fiscal position and the ongoing domestic political situation.

Last week, Fitch Ratings downgraded Malaysia’s long-term foreign-currency issuer default rating (IDR) to ‘BBB ‘ from ‘A-‘ with a stable outlook, on the grounds that the impact of the Covid-19 crisis has weakened Malaysia’s key credit metrics.

“Perikatan Nasional (PN)’s denial that Malaysia is in the midst of a political and economic crisis risks further future downgrade of sovereign credit ratings,” Lim said in a statement today.

The Bagan MP also noted Fitch Ratings had downgraded Malaysia’s sovereign credit ratings for the first time since the 1997/98 Asian Financial Crisis, making Malaysia the first major Asean country to suffer such a fate in the current Covid-19 pandemic.

“Unfortunately, the PN federal government has chosen to be in denial and not address the decline of Malaysia’s key credit metrics that led to the downgrade from A – to BBB , namely political instability and lack of transparency or governance standards.

“The unceremonious removal of the mentri besar of Perak by his own PN ally Umno last week, underscores Fitch’s on the spot assessment of Prime Minister Tan Sri Muhyiddin Yassin’s slim two-seat parliamentary majority as the cause of the political instability,” he added.

The ratings agency said measures to contain the domestic spread of the coronavirus, combined with weak investment and low tourism receipts due to the pandemic, have reduced economic activity in Malaysia, as it has in many countries globally.

Fitch said it expects Malaysia’s Gross Domestic Product (GDP) to contract by 6.1 per cent in 2020 before rebounding by 6.7 per cent in 2021 due to base effects, a revival of infrastructure projects and an ongoing recovery of exports of manufactured goods and commodities.

In the same statement, the former finance minister chided his successor Tengku Datuk Seri Zafrul Tengku Abdul Aziz for apparently “sugar-coating the numbers” to make Malaysia’s financial equity look good when in reality his projections are way off.

“He (Tengku Zafrul) should stop sugar-coating the numbers but disclose realistic and accurate growth projections of our GDP growth, revenue collections and government debt, which is at variance with Fitch’s analysis.

Lim said the sovereign credit rating downgrade is akin to a vote of no confidence by foreign investors and financial experts.

He also reiterated his call for the PN government to work with all parties to resolve the crisis.

“This sovereign credit rating downgrade is an urgent wake-up call for the PN government to carry out urgent political and economic structural reforms. Unless PN seeks to unite and work together to provide certainty, clarity and consistency to our political and economic policies, Malaysia’s prospects will not be bright and the outlook foresees risks of future downgrades,” he said.

Fitch noted that the new government continues to implement some transparency-enhancing measures launched under the previous coalition, and corruption trials of former officials have continued.

However, in its view, the government’s thin two-seat parliamentary majority implies persistent uncertainty about future policies.For any query with respect to this article or any other content requirement, please contact Editor at contentservices@htlive.comCopyright 2017 Malay Mail Online

It looks like Johnny Depp has a new woman in his life and it’s the woman who defended him during his United Kingdom libel case, Joelle Rich. According to one source, “They are dating but it’s not serious.” Rich is a...
Read more

Influencer Tammy Tay recently revealed that she went to OnlyFans to make ends meet after taking a six-figure loan to keep her businesses afloat...
Read more

Netflix to stream 140 new titles, says goodbye to 30 others

Here’s your chance to catch some shows before they leave the streaming service this month. Netflix is saying goodbye to Schitt’s Creek among 30...
Read more

A massive python was spotted along a footpath at Ulu Pandan, requiring two officers from the Animal Concerns Research and Education Society (ACRES) to...
Read more

Maid says her employer hacked into her Facebook account since 2020; every time she gets a message, their laptop gets a notification as well

A woman who goes by “Betty Ganda” on Facebook wrote in a public group that her female employer has been hacking her Facebook account...
Read more

It looks like Johnny Depp has a new woman in his life and it’s the woman who defended him...
Read more

Netflix to stream 140 new titles, says goodbye to 30 others

Here’s your chance to catch some shows before they leave the streaming service this month. Netflix is saying goodbye...
Read more

A massive python was spotted along a footpath at Ulu Pandan, requiring two officers from the Animal Concerns Research...
Read more
Follow us on Social Media