Singapore — Workers’ Party MP Jamus Lim was accompanied by his wife and young daughter during a walkabout in his Anchorvale ward of Sengkang GRC on Saturday (Dec 5).

In an Instagram post, Associate Professor Lim highlighted his wife’s work experience and how she had a keen eye for things that needed more attention in the estate.

He said: “Today, I had unusual company on my weekend estate walk. Since we were together at our prior appointment, my wife and daughter accompanied me for my rounds around the 355/6 Anchorvale cluster.

“As it turns out, my wife used to do site inspections when she was in the Peace Corps in Bolivia, and she has a keen eye for things that look awry.”

Their daughter, who is just over a year old, appeared to enjoy being out and about with mummy and daddy.

A/Prof oted: “My daughter, in contrast, was mainly entertained by being out and about in a new space, and making her usual baby gurgling and cooing noises. So in addition to a little family time, they also got a glimpse of what keeps me busy on weekends!” 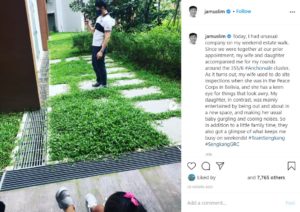 Although A/Prof Lim likes to keep his personal life private, he has publicly shared his love for his young family on several occasions.

During the General Election this year, he said that all that he was doing was for his baby girl. On the day he was sworn in as an MP, he said that he was able to do what he did  because he had his wife’s “mental, emotional, and physical support”.

In a tribute to his wife, whom he has been with for a decade, he added: “I am reminded, daily, of her unassuming and tireless sacrifices she makes so that I may serve the people of Anchorvale and Singapore, and I hope I have likewise been a bulwark for her as she pursues her dreams.” /TISG