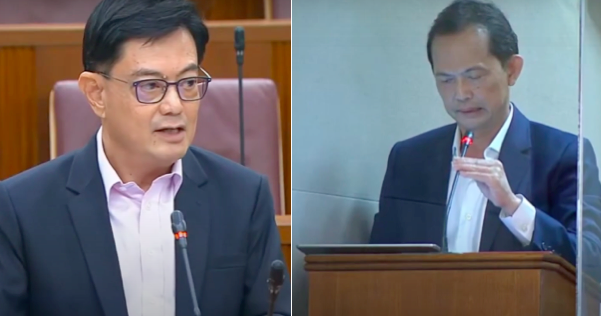 Mr Leong noted that some of the information set forth was incomplete and added that he aimed to clarify the entire picture.

He then asked Deputy Prime Minister Heng four questions:
1. Do you agree that this year, fiscal resources amounted to S$128 billion?
2. While you refuse to announce the accurate figures of the reserves, the Government publishes financial statements every year, and as of March 2020, the total financial assets reported in the financial statements were S$1.35 trillion dollars. Please confirm that.
3. You provided some figures to say that the middle-class Singaporeans are getting more from the Government than the taxes they pay. Have you taken into consideration all the indirect taxes when you factored your conclusion?
4. For all the expenditures that the Government is trying to incur, are you prepared to give a 20-year forecast of all the expenditures that are going to come?

Briefly addressing Mr Leong’s questions while repeatedly asking him to “do his research” before raising questions, Mr Heng said: “Since you entered Parliament in the various budget debates, you have been raising this. I’ve been answering as patiently as I can. I hope that this will be the last time that I answer this.”

DPM Heng also added that he was not prepared to come up with a projection for the next 20 years, or even for five years.

He repeated that Mr Leong should do his “homework” before debating on the numbers.

When Mr Leong went up to the podium to respond, he was told by the Speaker: “Mr Leong I have not called you yet.”

When Mr Leong tried to explain why he felt compelled to interject, Mr Tan said: “Mr Leong, wait till I call you. Mr Leong Mun Wai, if you have fresh insights please, thank you”.

The NCMP from the Progress Singapore Party (PSP) said that there is a need to know the size of the reserves so that we know how much to borrow.  He asked about the kind of infrastructure proposed to be built with Singa funds and how much they would cost.

He also asked if, given the economic slowdown, it would be prudent to get into debt financing, or whether we should postpone these projects.

Mr Tan then asked Mr Leong to present only any new insights he might have had.

Mr Leong said that Mr Heng had been unprofessional for suggesting he needed to “go back and do more homework and be more rigorous” and for brushing aside his alternative viewpoint.

Mr Leong was still speaking when the Speaker asked him again to present only new insights.

“There’s no point repeating the same question because you get the same answer,” Mr Tan added.

Coming up to the podium once again to reply, Mr Heng said that he was “speechless” at Mr Leong’s suggestion. “I hope that you listen carefully… I’m speaking and you’re looking into your phone. You know, I hope that you have the courtesy to at least listen when I am trying so hard to address you”, Mr Heng said. /TISGFollow us on Social Media