Singaporeans responding to founding Prime Minister Lee Kuan Yew’s daughter Lee Wei Ling’s latest comments on her late parents’ marital home at 38 Oxley Road have asserted that the late Mr Lee’s last wish to have his house be demolished should be respected.

In 2017, Dr Lee Wei Ling and her younger brother Lee Hsien Yang accused their elder brother, current Prime Minister Lee Hsien Loong, of abusing his power to preserve their family home, against their late father’s willed desire to demolish the house, in order to bolster his grip on power.

PM Lee denied the allegations against him but declined to sue his siblings for defamation since that would “besmirch” the names of their parents.

While PM Lee may not sue his siblings, he has initiated legal action against The Online Citizen for refusing to apologise and remove an article and a Facebook post that repeats the allegations made by his sister in 2017.

“My father made it well known in his lifetime that he would like 38 Oxley Road demolished when I no longer need it. Papa doesn’t mince words, yet a special committee of the Cabinet was formed to divine what Papa really wants!! As I stated in a Facebook post previously, one has to be remarkably dumb or ill-informed to not know what LKY wanted to happen to his marital home. He spent his whole life looking after the welfare of Singaporeans both current and further welfare. All he asks in return is that his marital home be demolished and not open to public or worst of all, turned into a shrine for him. He is strongly against any personality cult and to date, no major structure in Singapore has been named after him. If any Singaporean needs to be reminded of his legacy, just look around at the thriving metropolis and the kind of society we are.

“Another reason Pa wanted Oxley demolished was because Mama was a private person, she is willing to temporarily play the role of the prime minister’s wife but she does not want the public tramping through her family home. This is a minor reason as far as nation building is concern. But I am certain that forming a LKY personality cult is bad for Singapore. I had to move on after Papa’s demise and so should all Singaporeans. To look back with yearning for a dead leader means the country will never progress beyond the current phase.

“The problem is that the PAP is trying to build a LKY personality cult.I hope this will fade away. Not because I am an unfilial daughter but because I want Singapore to continue to prosper and survive beyond LKY. So Oxley should be demolished after I am gone. But precisely because this is not a certain outcome, I am bringing up this topic again.”

Netizens responding to the siblings’ post have expressed their support for them and asserted that the late Lee Kuan Yew’s last wish for his marital home to be demolished should be respected: 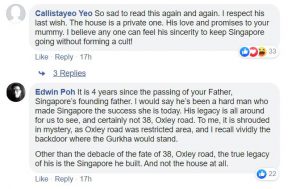 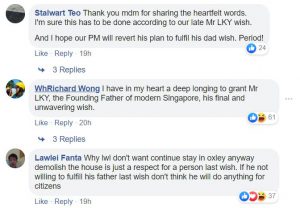 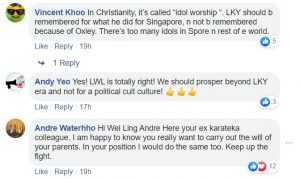