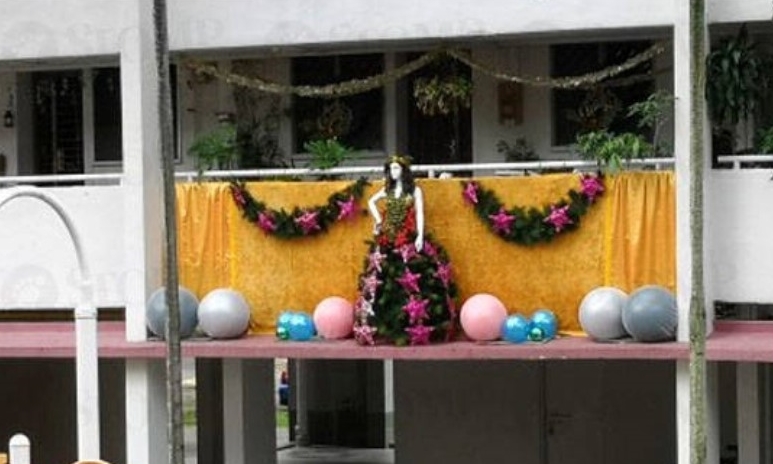 Jurong-Clementi Town Council has revealed that it has asked a resident at Block 351 Clementi Avenue 2 to scale down the elaborate Christmas decorations that they had placed on a ledge outside their second-storey HDB unit.

The rather beautiful decorations featured a mannequin wearing a festive costume, surrounded by balls of different sizes and colours, against a gold background. The decorations also featured leafy decorations strung up on the railing and on the edge of the corridor ceiling.

Sharing a picture of the elaborate arrangement to citizen journalism portal Stomp, a netizen named Augustana expressed concerns over the safety hazards the decor poses to passers-by on the ground floor, especially little children as there is a playground near the foot of the block.

Jurong-Clementi Town Council has since told the publication that they paid a visit to the resident and asked them to scale down and shift the arrangements:

“We visited the place and spoke to the resident, who appreciates our concern over the safety aspect. We have checked the fastening method and found that the decoration pieces are adequately secured.

“However, as the decoration had encroached onto the common area, we had asked the resident to scale down the decoration pieces and shift them to a place which is safer for everyone. The resident understood our advice.”