Is the problem skills upgrading, work culture or jobs? 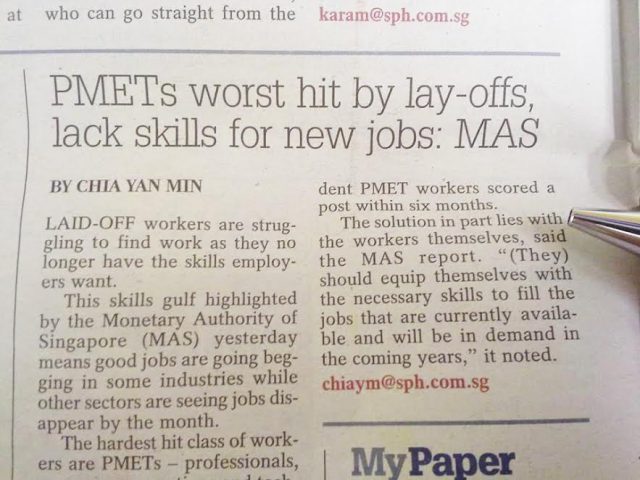 The announcement by the Monetary Authority of Singapore lamenting the lack of skills among our workforce as Singapore looks forward to more job layoffs, might have struck a rather negative chord with most.

The gloom of the situation would have hit us hard – we are looking at increasing joblessness, and PMETs will bear the brunt. What was more concerning, however, was that MAS somehow saw fit to remind workers about the need to “equip themselves with the necessary skills to fill the jobs that are currently available and will be in demand in the coming years.”

Nothing new there. The government has been prattling on about the need for our workers to upgrade, and SkillsFuture has often been touted as the visionary programme that would pull us through into a new economy.

Bu the story failed to answer what I believe to be the most pertinent question: “As a worker, how would I know what skills I need to upgrade to?” The answer would invariably be: “Depends on what the new job requires.”

However, the story was talking about layoffs, which means the new job is (presumably) not within the company.

A PMET on the verge of losing his job would be desperately applying for jobs – any job available. Each one could possibly, or MAS believes most likely, require new skills and new training. But which job should the job-seeker re-train for? Would he have enough time to re-train, before he loses his current job?

The uncertainties get worse when the layoff is sudden – workers are effectively left stranded with no job, little money, and no idea how to prepare for the future workplace.

The situation is different if they are upgrading for a better or new job, either within or outside their current employer. They would then know full well what they need to learn, or at least be assured that the employer will provide or direct this training.

Assuming that we do have such jobs in sight, are these employers inclined towards this culture of talent retention and development? If they have new jobs or new requirements, did they upgrade their existing workers to level up? If not, are they allowing workers to train for other jobs in other companies, and give them enough time to do so before they are laid off?

Without actual data from companies laying off workers, it is hard to see whether employers are taking care of their retained or retrenched workers. Furthermore, concerns abound regarding the true intentions of the layoffs – are they no more than an exercise in getting rid of the old hands to hire new, more updated hands? Are companies investing enough in their aged manpower, or are they just churning? What does it say about our work culture?

What I can relate to personally was having to counsel workers in the years around the 2001 economic slowdown. Some of them retrenched, they were eagerly seeking re-training, but as there was no real assurance that they have a job at the end of the tunnel, most were hesitant to take the leap, risking an investment in training that might not ultimately bear fruit. By comparison, the prospect of odd-jobbing, while daunting, did at least put food on the table. Many sought traineeship schemes, not because they like the low pay-outs, but because it gave them some assurance.

Can our government give our PMETs any assurance that they will have a job at the end of their training? What has been the success rate of the schemes announced earlier this year, such as the Career Support Programme, in getting actual job placements?

The fact is that this this quagmire was already painfully apparent in 2001. MAS’s statement rings ridiculously hollow, as if the government has learnt nothing all these years. In essence, workers are expected to provide their own solutions (re-training) to a problem that did not originate with them (layoffs and lack of jobs). Can MAS even realistically expect the jobless problem to be solved this way?

To pin it on workers to be ready for new jobs smacks of irresponsibility, and MAS should have known better. Or perhaps it doesn’t, for shouldn’t such proclamations be made by the Ministry of Manpower? And if even MOM is silent on this one, we really have a lot to worry about.

If all we have are schemes that train and re-train our PMETs for jobs that are not coming, then the decent and responsible thing for our government to do is to be honest with our workers, instead of turning that responsibility over to them.Follow us on Social Media