The Independent News
Home News Featured News "Is it (turban) removable?": Singaporean is asked in a job interview

“Is it (turban) removable?”: Singaporean is asked in a job interview

A Singaporean has alleged that he was asked in a job interview whether he could remove his turban in order to make the prospective employers more comfortable.

Mr Parvitar Singh, a photographer and a former air force officer, shared his experience in a Facebook post published on Monday (July 20).

Mr Singh shared that he had applied to work for an organisation that required a certain level of face-to-face interaction. He was contacted on Monday morning by a company representative who told him that he fitted the bill, before allegedly asking him: “Sorry ah sir, I see your name ends with Singh. So you have the cloth thingy on your head ah? Is it removable or do you always wear it?”

Mr Singh said he replied: “Yes, I am a Singh. It is called a turban and no it is not removable. Is there an issue?” The company representative allegedly said: “The thing is I’m not sure if the organisers will be comfortable with it.”

Mr Singh, who was incensed by then, said: “You do know that the constitution allows me to work and live as a Singaporean whilst having my turban on right? Mind you, I was in the air force. A place not many can be in due to clearance issues.”

In his Facebook post, Mr Singh said that this was not the first time this had happened to him. Sharing that he was appalled to be told that he could not conduct himself with his turban on in his own country, he added: “Will definitely be viewing my options and will escalate this matter to ensure no other individual becomes a victim of such discrimination.”

Mr Singh’s post quickly went viral and has about 1,000 shares and nearly as many reactions on Facebook. People online were outraged by the company’s blatant hiring discrimination and expressed their support for Mr Singh to escalate the matter to the authorities: 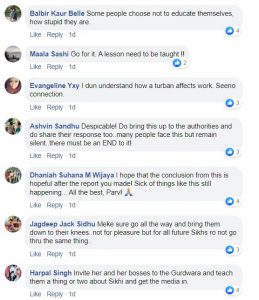 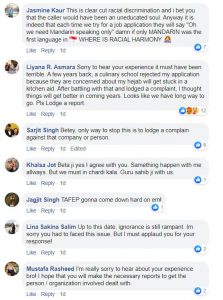 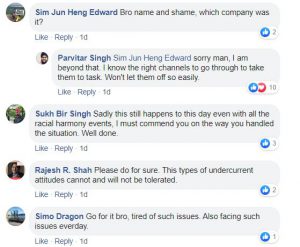 Had applied to a certain organization for business needs which entails a certain level of face to face interaction….