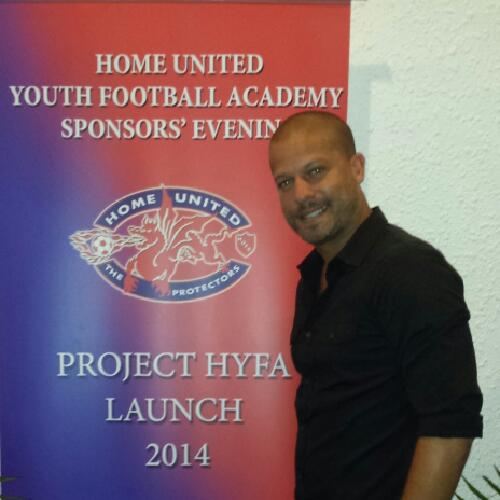 Messelem defended his credentials and said: “If you (Tan) need any proof, I’ll be more than happy to show (you) the work that has been done…by the way, I’m not in charge of the kids academy, so you can definitely send your kids to our local ‘A’ licence coaches at HUFC.”

He then said: “HUFC as an institution had made all the necessary investigations before hiring me as a TD…if you really want the best for your kids, maybe you should ask for the yearly program and evaluations more than licences. From my side, I’m not really into sharing my skills or qualifications on social media. By the way, I am qualified and even have testimonial letters from eight different academies all around the world as record of my past involvement in kids’ development.”

When Messelem directed Tan to email the club if he wanted further answers, Tan replied and said: “All I’m asking is if you are qualified and have the necessary qualifications as proof… Home United website stated that you are in charge of the youth academy…and I have the right to check if my son is trained under qualified coaches. Testimonials doesn’t mean you are qualified.”

Former HUFC and Sengkang Punggol goalkeeper Amos Boon also chimed in in questioning Messelem’s qualifications. Boon said: “Home United should have done their due diligence,” said the retired player, who is now a businessman. “We can’t have our kids in the hands of inexperienced officials. I’m sure most parents will be concerned. I wonder how the Home United management allowed something like this to slip through.”

HUFC responded to the questions in its Facebook page yesterday (31 Oct) and said:

“The club is aware of recent queries with regards to HUFC Technical Director, Adlane Messelem.

Since 2013, the club has embarked on a pioneering project, committing significant resources into its youth development programme. The programme’s success can be seen in HUFC’s success at youth and U21 level, both via results in competitions, as well as the players that have come through the system and represented the club and country at various senior level and international tournaments respectively.

Adlane was recruited as part of this effort so as to develop a youth development programme based on the overall best practices in top academies across Europe. His connectivity within these clubs has been invaluable in allowing HUFC to expand its footprint and access to the highest standards of youth development. He was supported in this effort by Steve Vilmiaire, himself a top youth coach with the UEFA “A” License. This initiative is undertaken by HUFC at its own discretion and as such, gives the club full autonomy in managing its staffing structure and the hiring of key personnel.

The recruitment of these personnel have resulted in the development of a comprehensive framework addressing many different aspects of football-related development, tracking, testing and remediation that will be of pivotal use to the club, moving forward.

Ultimately, HUFC’s vision is to continue its good work in the development of youth, in line with supporting the national aim of developing a bigger pool of quality players to represent the country. To realise this vision, HUFC will need to lead the way in taking innovative steps to constantly push the envelope in this area. HUFC is proud to say that it has developed among the nation’s best functional and infrastructural capabilities for youth development and remain committed to do so, for the coming future.”

HUFC however did not address concerns that Messelem had been working for the Club for the past two years without any coaching qualifications. Most professional football clubs require their Technical Directors to have at least an “A” coaching licence although a “Pro” Licence is preferred.

It is unclear why the Club offered the job of overseeing the coaching operations of the Home United Youth Football Academy (HYFA) to a Algeria-born Frenchman when there are Singaporeans with pro license like Terry Pathmanathan who may be available for the job.

The Straits Times reported in 2013 that experienced Singaporean coaches with pro-license like Richard Bok, Terry Pathmanathan and Kadir Yahaya are increasingly finding themselves disengaged from the local game because they cannot secure coaching contracts.

Bok had reportedly left coaching to be a financial planner with a local insurance company.

Terry Pathmanathan, the former national captain had previously blasted FAS’s lack of respect for local coaches in an interview to The New Paper.

“The FAS has no respect for local coaches. After all I have done for my country as a player and as a coach, this is what I get? “Why obtain a pro diploma in coaching and then get ignored?”