Netizens felt that MP Dr Amy Khor made too much of a big deal over what is, after all, a temporary bus stop, what with not just herself but two other officials attending the ceremonial ribbon cutting

Singapore — Some Hong Kah North residents needed an additional bus stop, and so they got one. While many thanked MP Dr Amy Khor for it, others were not too happy over the ceremonial ribbon cutting she held to commemorate the opening of the bus stop. After all, it is only a temporary one.

Apparently, Dr Khor, the Senior Minister of State in the Ministry for Sustainability and the Environment and Ministry for Transport as well as Member of Parliament (MP) for Hong Kah North SMC, had heard feedback from residents that an additional bus stop was needed in the area.

In a Facebook post on Monday (Nov 23), Dr Khor said she was “Happy to announce the opening of the temporary bus stop 40331 at Blk 460D Bt Batok West Ave 9!” which had been due to the “hard work of our grassroots and the feedback from our residents.”

The new bus stop was accomplished quickly, she added. Writing that they “managed to get LTA to expedite the work” so that residents would “benefit early.”

Dr Khor also wrote, “I will continue to work closely with our various agencies to uplift the lives of our HKN residents! Together, a more conducive Hong Kah North!”

The temporary stop is for residents of the Bukit Batok West extension and Hong Kah North, many of whom left heartfelt thanks to the MP in the comments on her post. 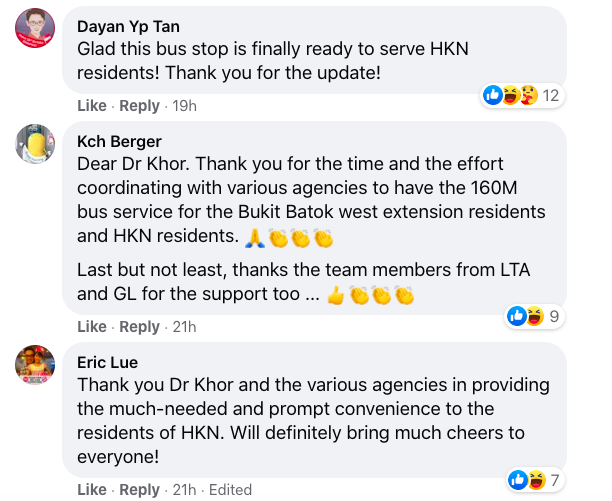 However, other netizens felt that the MP had made too much of a big deal over what is, after all, a temporary bus stop, what with not just herself but two other officials attending the ceremonial ribbon cutting. They were also accompanied by at least half a dozen others, leading to questions on why so many people had gathered together while the country is still under restrictions to prevent the spread of Covid-19.

“Homegirl literally cut a ribbon and staged a photo op for a temporary bus stop,” tweeted @lim_jialiang, who reposted some of Dr Khor’s photos on Twitter.

Homegirl literally cut a ribbon and staged a photo op for a temporary bus stop pic.twitter.com/A5Mhjkn1Aq

“Goodbye, bus!” Said the overpaid minister whose side gig is a CDC Mayor,” he added.

“Goodbye, bus!” Said the overpaid minister whose side gig is a CDC Mayor pic.twitter.com/EW2r4q5XOz

One resident, however, was quick to defend Dr Khor.