Netizen Shane Yan took to Facebook to recount the story of an unusual Grab ride, wherein the driver told her and her husband that two of his son’s primary school classmates took their own lives because of pressure at school.

Apparently, the driver’s son had done well in his O-levels, but was afraid to tell his own friends since the news may drive them to do drastic things. The boy had one friend from primary school who took his life when he fell one point short of passing exams, as swell as another friend who had also committed suicide.

The driver had also been anxious concerning his son, who had been failing.  “I was so afraid my son would do something silly on the day of the results that I had to keep reminding him that it doesn’t matter if he fails and it is more important that he comes home.”

Ms. Yan could only respond with a series of shocked and tearful emojis.

According to Samaritans of Singapore, a suicide prevention center operating since 1969, suicide is the biggest cause of death for people from the ages of 10 through 29, with males committing suicide twice as much as females do. Each suicide leaves at least 6 survivors behind, and 2.4 times more people die from suicide than vehicular accidents.

In January of this year, after the O-level results came out, one 16-year-old boy was found dead on the ground floor of a housing block at Jurong West. On social media, it was widely speculated that he may not have performed well on the tests.

Ms. Yan’s post struck a chord with netizens, who have shared her story more than 600 times. Many told their own stories in the comments and expressed their sadness that children face such pressure. 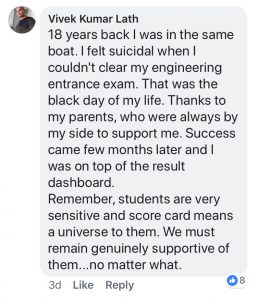 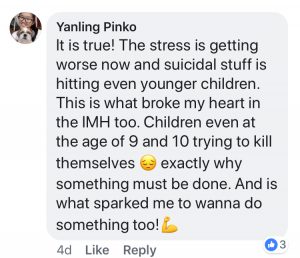 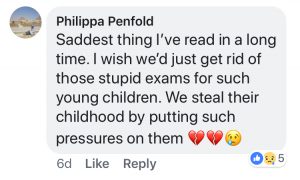 Others emphasized how important good parenting is 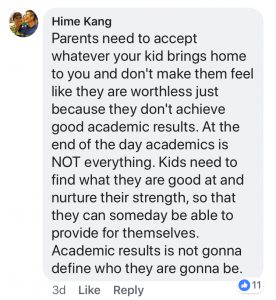 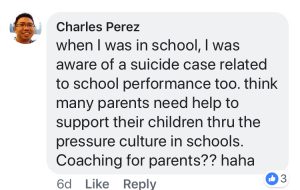 One netizen asked, “How can one be creative if one is not allowed to fail?” and emphasized that it is not failure that counts, but getting up again. 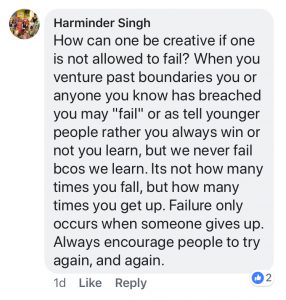