A report entitled “Behind Closed Doors: Forced Labor in the Domestic Work Sector in Singapore” releases its conclusion saying that foreign domestic helpers in Singapore are at risk to becoming victims of forced labor.

According to the Humanitarian Organization for Migration Economics (HOME), between April 2017 and March last year, 872 workers complained of work-related concerns such as employers driving them too hard, spoken insults, salary issues, and insufficient food provisions among others. 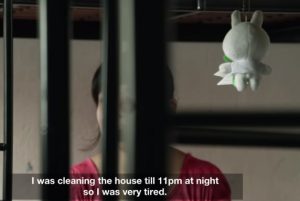 Among the many examples of forced labor underscored by the HOME report is the deplorable situation of a domestic worker who worked for her Singaporean employer for almost a decade – during which over $40,000 of her compensation was taken from her.

As narrated in the report when that maid’s employer was interviewed, the maid is not allowed to hold any money, keep her passport and Work Permit, and is not entitled for any rest days.

The maid’s requests to go home were never granted, she could not own any mobile phone, was never shown or given a copy of her employment contract, and was forbidden to speak to her family for nearly seven years.

Domestic helpers working in Singapore are not covered by the city state’s Employment Act and while this regulates the hiring of foreign workers and enumerates the responsibilities of employers, it is not clear-cut regarding work hours and simply states that the maid should have “acceptable” accommodation, “adequate” food, “adequate” rest, and “reasonable” notice of repatriation.

In a statement, authorities from Singapore’s Ministry of Manpower claimed that the report “does not accurately reflect the employment and working conditions of foreign domestic workers in Singapore.”

The Ministry likewise underscored the necessity of forced labor issues to be evaluated on a case-to-case basis and not generalize because of the complex situations involved.

“Meeting one or more of the [International Labour Organisation’s] forced labor indicators may not necessary mean that a worker is indeed in a forced labor situation as each case needs to be assessed based on the facts,” they were quoted as saying.

To mitigate such situation within Singaporean households, eleven recommendations were drafted. These included extending the Employment Act to cover foreign domestic workers and the regulation of work hours, notice periods and sick leaves; allowing maids the freedom to change employers; eliminating the S$5,000 security bond; and also get rid of recruitment fees.

According to one of HOME’s spokesperson Chok, a lot of migrant workers who came to their organization for help described their experience as an episode of bad luck. “But it is not just bad luck. It is really a symptom of how flawed and dysfunctional our migration regime is, how inadequate our policy framework is that decent work and fundamental human rights have to be a gamble,” Chok said.