Doritan is Singapore's new mascot – Super cute or ugly? What do you think? 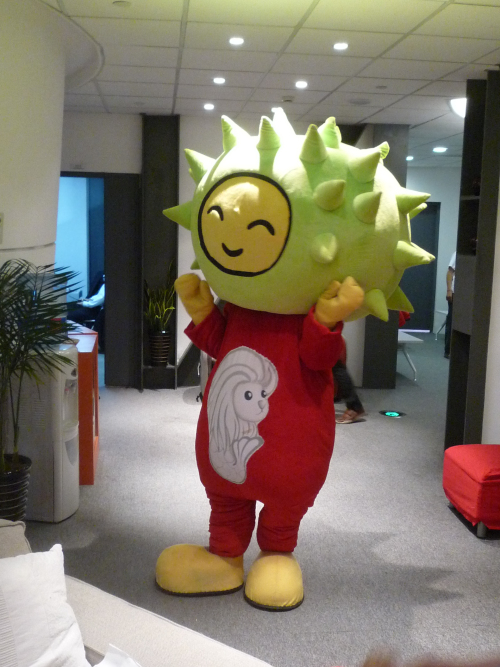 But what has raised some eyebrows is, while Japan chose the iconic Hello Kitty to be its mascot of the celebrations, Singapore chose an unknown, Doritan.

Doritan is not exactly new. He was known as ‘Durian Boy’ or ‘Durian Star’ (榴莲小星) previously and world saw him at Shanghai World Expo 2010. He was five-years-old then and his parents are well-respected musicians who always bring him to travel around the world. He also loves to wear red clothes with a Merlion image and a durian-shaped cap.

A blogger who was at the Singapore pavilion at Expo 2010 in Shanghai had these choice words for the mascot.
“Tell me please — anyone — is it possible at all to design something uglier than this complete and utter monstrosity? It’s a frightful, grotesque and nightmare-inducing eyesore — some of the autistic children I’ve worked with could design something better with their eyes closed.”
To be fair, another blogger described the mascot as being ‘super cute’ and said “His spiky head is a really good representation of Singapore’s famous fruit, too. I’m definitely getting Little Durian Star plushies and keychains when I’m at the SG Pavilion. Hands up if you want me to get you one, too!”

Doritan is also one of the few times when a singa (or lion of some sort) has not been the mascot of Singapore.
What do you think of Doritan?Follow us on Social Media