“We should not demonise Alfian Sa’at. He is one of our most talented playwrights” Prof Koh said.

Singapore—The furor over the cancellation last month of a Yale-NUS module on dissent that was to have been led by playwright Alfian Sa’at has not died down.

In Parliament on October 7, Monday, Minister of Education Ong Ye Kung commented on the matter, saying that academic freedom must have its limits.

“Academic freedom cannot be carte blanche for anyone to misuse an academic institution for political advocacy, for this would undermine the institution’s academic standards and public standing.”

The main issue, he said, was that the module “may be used to conduct partisan political activities to sow dissent against the government is not unfounded. MOE [the Ministry of Education] had that concern too when we saw the itinerary of the ‘Dissent and resistance’ project.”

The Education Minister also read an excerpt from Mr Alfian’s poem, Singapore You Are Not My Country. Mr Ong commented that despite allowing for “some artistic licence”, the playwright “continues this attitude consistently in his activism,” giving such examples as when Mr Alfian said of the defeat of former Malaysian Prime Minister Najib Razak in the May 2018 elections, that “juxtaposed…favourably against Singapore, and dismissed the fear of ‘chaos in the streets, clashes with riot police, traffic at a standstill’”.

Many netizens responded to Mr Ong’s speech in parliament, with some Singaporeans rising to defend the playwright, including veteran diplomat Tommy Koh, who has not been without recent controversial statements of his own.

On the morning of October 8, Tuesday, Mr Koh posted a link to the Minister of Education’s speech in Parliament, along with the following comment.

“We should not demonise Alfian Sa’at. He is one of our most talented playwrights. I regard him as a loving critic of Singapore. He is not anti- Singapore. I admire very much his plays, Cooling Off Day and Hotel. It is of course true that some his writings are critical of Singapore. But, freedom of speech means the right to agree with the government as well as the right to disagree. I feel that I should defend him at this moment when he must feel discouraged and worried and friendless.”

A number of netizens thanked him for speaking out on Mr Alfian’s behalf. 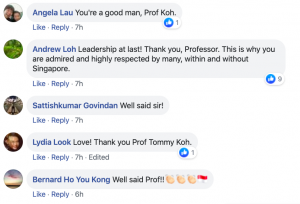 The playwright answered the Education Minister in a post in which he asked,

“The honourable Minister talks about the importance of academic freedom on campus in Singapore. Now one asks, what about freedom of expression in the arts?”

A reporter asks for my response to this segment of Mr Ong’s speech:“And as for Mr Alfian Sa’at himself, in 1998 he…

However, by Tuesday afternoon, Mr Sa’at thanked his followers and asked them to not make “derogatory remarks” about Mr Ong.

Good morning Finland! And thank you everyone for all your messages. Some of you who are feeling angry or upset, can…

“Some of you who are feeling angry or upset, can I ask for a favour? Please do not make derogatory comments about the Education Minister. I’ve seen comments about him getting into office through the ‘backdoor’ route of an ‘easily electable’ GRC, that he’s overpaid, that he’s hopeless at literary interpretation. (On that last point, maybe someone drafted those bits for him? I doubt that the good Minister would have had time to comb through all my Facebook musings or all my written output to look for something remotely ‘incriminating’ so as to force onto me a ‘disloyal anti-national’ image.)” -/ TISG

Read related: Alfian Sa’at tells his side of the story on the Yale-NUS module cancellation