The Archbishop of Cyprus Chrysostom II, head of the Orthodox Church in Cyprus, has admitted that he was involved in getting Malaysian fugitive, Jho Low a passport from that country.

A senior Cypriot government official confirmed to Bloomberg yesterday, Nov 4, that Low has Cypriot nationality. After the news report went viral, the Archbishop admitted his role in getting Jho Low a European Union passport.

Politis, a news portal in Cyprus said the two were in talks for investment on church property.

The Archbishop vouched for Low after the latter bought a mansion for five million Euros in the resort town of Agia Napa.

Under a Cyprus scheme, anyone buying a property for that amount of money is eligible to get a passport.

The Archbishop says Jho Low had approached him and urged him to pursue the naturalisation process for Jho Low.

He said the business told him he was building villas on the land he bought in Agia Napa. He said Jho Low gave three names to process for naturalisation.

But the Archbishop says he did not know if Jho Low’s application was to be successful as he personally does not have access to the process which involves the ministry and the police.

He even said it is the Ministry of Internal Affairs that have access to the police, the Central Bank and Interpol, perhaps hinting they should have known who Jho Low was.

Another portal in Cyprus, Rick, says the Malaysian had donated 300,000 Euros to a theological school, which may have led the Archbishop to assist Jho Low in the naturalisation process.

Meanwhile, Malaysia says it will not give up its hunt for 1MDB fugitive Jho Low even though it is difficult to catch him while other countries are hiding him. 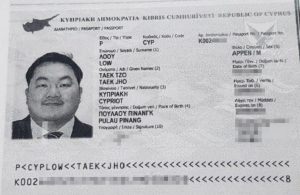 “Even though we have received some information about his whereabouts as well as Interpol’s cooperation to issue a red notice, but if we do not get cooperation from the countries where we suspect Low is, then it is difficult to take action.

“But we are still trying. We cannot give up. Whatever it is, we want to bring him back to Malaysia to face the court of law,”  Malaysian Home Minister Muhyiddin Yassin said yesterday (Nov 4).

“Even if he has undergone cosmetic surgery, what is important is for us to pursue him.

“We will not stop until we get cooperation from the countries where he is and with Interpol’s help, we can solve it,” Muhyiddin said. -/TISGFollow us on Social Media