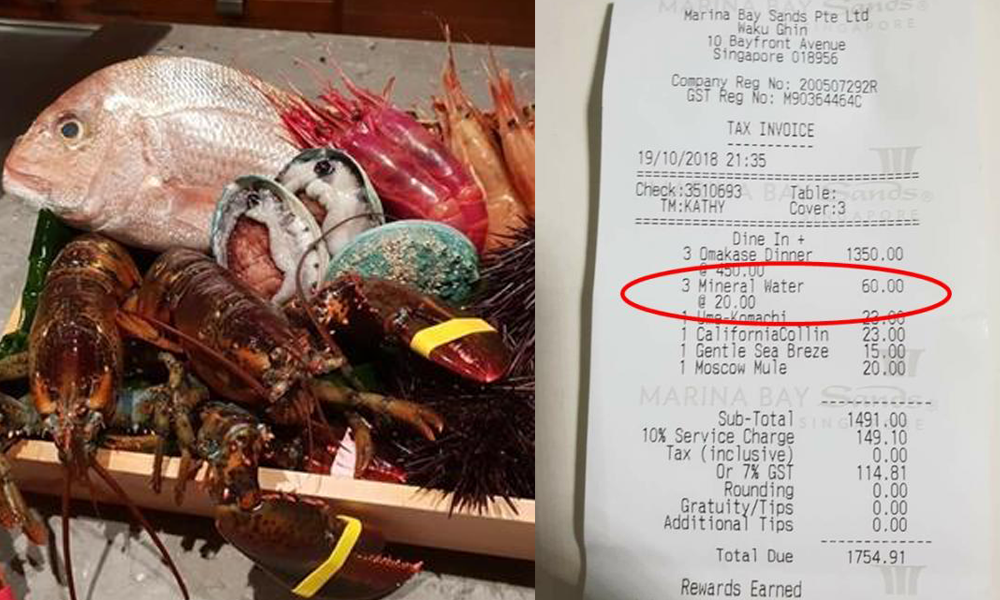 A customer dining with her friends at the Waku Ghin restaurant was stunned after the items she thought would be the cheapest in her bill, mineral water, ended up costing her $20 a pop.

The diner, a young woman who declined to be named, shared the receipt of her recent meal at the pricey restaurant, which revealed that she was charged $60 for three bottles of mineral water, alongside a hefty $1350 for 3 Omakase set meals, that went for $450 each.

With this, plus the cocktails the diners ordered, the nearly $150 service charge and almost $115 Goods and Services Tax charge, the total bill came to an astronomical $1754.91.

According to Marina Bay Sands’ website, Waku Ghin has been awarded two Michelin stars by the Singapore Michelin Guide 2018: “Acclaimed worldwide for contemporary Japanese-European cuisine, two Michelin star Waku Ghin will take you on a rare culinary journey that leaves an enduring impression.”

Marina Bay Sands adds that the restaurant is run by Chef Tetsuya Wakuda, who is “regarded as one of Australia’s finest chefs.”

With employees going back to the office, firms must comply with...