Car mounts Buffalo Rd kerb and nearly crashes into stores, only to be ‘stopped’ by photo of Lee Kuan Yew 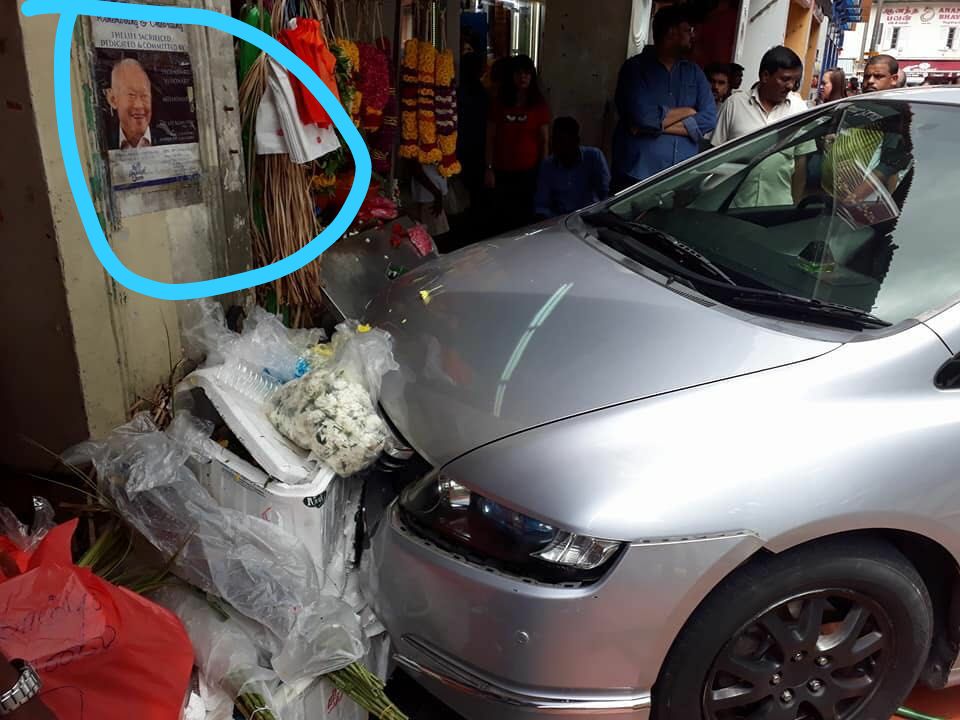 The photos show a car having mounted atop a kerb and stopping in front of a pillar between the Naili Pte Ltd and Komala Vilas storefronts at Buffalo Road, opposite Tekka market. If the vehicle had moved further, it may have caused significant damage in the area.

Interestingly, the pillar that the car almost touched bears a poster with a photo of Singapore’s late founding prime minister Lee Kuan Yew on it – a bizarre coincidence that has led some WhatsApp users to share that it was the photo of Lee that ‘stopped’ the vehicle from causing further damage.

A ruling party fan group, Fabrications about the PAP, also posted that the car “stopped” in front of Lee Kuan Yew in a Facebook post that received 100 likes and nearly as many shares within just one hour. Netizens sharing and commenting on the post said that it was the late elder statesman who “stopped” the car:

Posted by Fabrications About The PAP on Tuesday, 17 April 2018

This is not the first time that Singaporeans have claimed the late Lee Kuan Yew has still had a presence in Singapore. In 2016, the same Facebook group claimed that a ray of light that was shining upon the Singapore skyline, as seen from Gardens by the Bay, bore the likeness of Lee Kuan Yew: