Several netizens have praised veteran politician Tan Cheng Bock on Emeritus Senior Minister (ESM) Goh Chok Tong’s own Facebook page, after Mr Goh commented that Dr Tan’s party may be “eyeing” his Marine Parade ward as they prepare for the next election.

ESM Goh highlighted his nearly 60-year friendship with Dr Tan with his short post and indicated that Dr Tan is ‘betraying’ him like how Brutus betrayed Caesar. Some netizens responding to ESM Goh’s post, however, used another line from the same play – ‘Beware the Ides of March’ – to warn ESM Goh of potential doom if he faces off with Dr Tan.

Netizens pointed out that in the Shakespearean play, Caesar was a dictator and Brutus faced a great moral dilemma over honour, patriotism and friendship as he joined the conspirators to kill Caesar for the good of Rome. The play even ends with a tribute to Brutus who is called “the noblest Roman of them all” because he was the only conspirator who acted, in his mind, for the good of Rome.

Highlighting that the quote ESM Goh used comparing himself to Caesar and Dr Tan to Brutus does not necessarily do himself any favours, some netizens felt that Mr Goh’s Facebook post could indicate that the former Prime Minister is nervous over the prospect of losing his ward to his friend – especially given rumours that ESM Goh will be lifted out of the ward after more than three decades representing the constituency: 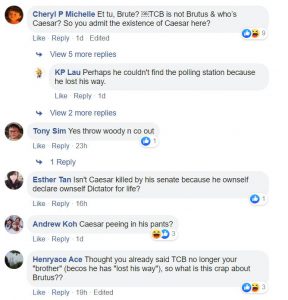