84-year-old Mr Chiam first entered politics in 1976 and became Singapore’s second opposition politician ever to be elected to Parliament after J. B. Jeyaretnam of the Workers’ Party. Since 1976, he was re-elected to his Potong Pasir ward in each subsequent election until he left the ward to contest larger ground in 2011.

Last month, the SPP announced that Mr Chiam would be stepping down from the SPP’s leadership. At the SPP’s Ordinary Party Conference that was held yesterday (16 Oct), Mr Chiam did not contest the CEC election for the first time in 23 years, since 1996.

Besides being favoured by many Singaporeans, Mr Chiam is also one of very few opposition politicians who has earned the respect of prominent members of the ruling People’s Action Party (PAP). Both Singapore’s current and immediate past Prime Ministers, Lee Hsien Loong and Goh Chok Tong, have treated Mr Chiam well when they encounter one another.

Mr Goh was the guest-of-honour at the Chiam See Tong Sports Fund’s most recent fundraising dinner. In his biography, Mr Goh called Chiam a “gentleman politician” and said:

“I regard Chiam as a friend…I have seen him at dinners outside. He would come to me and I would go and talk to his wife and so on. If I see the wife, I would ask her how Chiam is. He was a gentleman politician. He had his own purpose in politics, which is to create a two-party Parliament. There is nothing wrong with that. We did not like it, but we said, you try, so he tried.”

Mr Chiam rose from his wheelchair and was accompanied by his wife Lina Chiam and PAP Minister Vivian Balakrishnan as he slowly made his way to the casket. The opposition politician, who was received by Prime Minister Lee Hsien Loong and his wife Ho Ching, was reportedly emotional and had tears welling up in his eyes as he paid his last respects to Mr Lee.

Singaporeans are now thanking Mr Chiam for his political service and his tireless contributions to the nation. Pointing out that Mr Chiam will be known for how honourable and respectable he is, Singaporeans appreciated Mr Chiam and wished him well as he retires from politics: 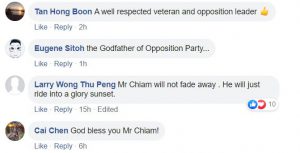