The Independent News
Home News After Biden's win, video clip of his 2013 visit to Singapore circulates...

After Biden’s win, video clip of his 2013 visit to Singapore circulates online

Singapore — A video clip of the 2013 visit to Singapore by then US Vice-President Joe Biden is making the rounds online following his election last week as the next President of the United States.

The clip, which runs for less than a minute, shows Mr Biden buying a lime juice from a stall at the Adam Road Food Centre.

It also shows him walking around the centre, shaking hands with a man at an Indian rojak stall and another man later on. There are people who are taking photos of the visitors and at least one man takes a photo with Mr Biden.

The Democratic former Vice-President during the term of Mr Barack Obama succeeded in unseating the incumbent, the Republican Party’s Donald Trump, in a hotly-contested and divisive election.

Mr Biden was in Singapore from July 25 to 27, 2013. He was accompanied by his wife, Dr Jill Biden, as well as senior officials from the Vice-President’s Office, National Security Council, and Department of State, according to a press statement from the Prime Minister’s Office (PMO) at that time.

Mr Biden met Singapore’s founding Prime Minister Lee Kuan Yew as well as PM Lee and then President Tony Tan. PM Lee hosted Mr Biden to a working dinner which was attended by the Speaker of Parliament and Cabinet ministers.

Dr Biden, a longtime educator, wrote in a blog post published on the White House website that she and the Vice-President had gone on a tour of the Singapore Botanic Gardens.

“Today was our first full day in Singapore and there could not have been a more beautiful introduction than our tour of the Botanic Gardens. Singapore Botanic Gardens are known for their orchids and in 1957 the country began to name selected orchid hybrids after State Visitors to foster closer ties between nations. As an avid gardener, I am honored that they chose to name a deep purple Dendrobium orchid the ‘Joe and Jill Biden’ during our visit today. We’ll bring some ‘Joe and Jill Biden’ orchids back to DC to display at the Vice President’s Residence.” 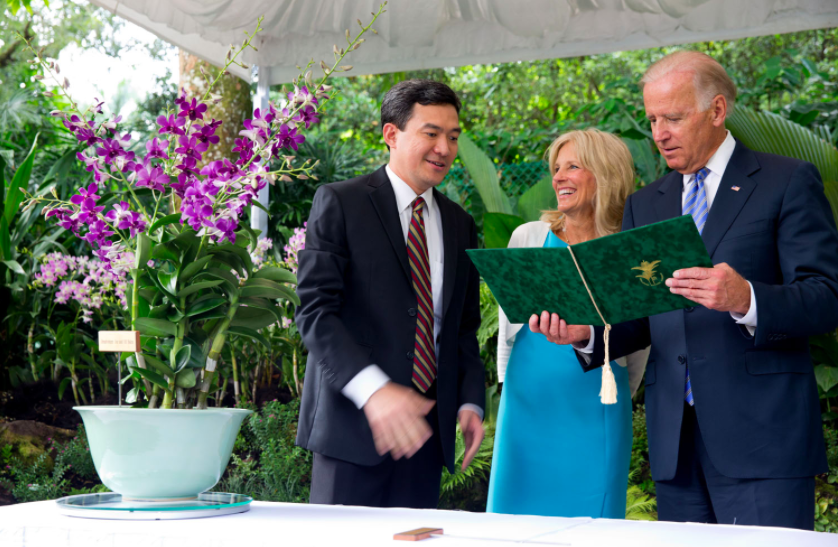 NParks described the orchid hybrid as “vigorous, free-flowering and long-lasting”. She wrote: “The story of Mr and Mrs Mallard and their eight ducklings is one of my favorite children’s stories. As an English teacher, I love nothing more than helping kids appreciate reading. I especially relish any opportunity I have to spend time with young children who are just discovering how exciting and eye opening reading can be. Each child was so attentive and interested which reaffirms the importance that Singapore, like the United States, places on early education.” The Bidens were also received at the Istana, where Dr Biden had tea with the then First Lady, Mrs Mary Tan.