On Tuesday, June 24, the Philippine Embassy in Singapore issued an advisory telling married Filipinas to correctly report their civil status at Immigration Checkpoints in Singapore. 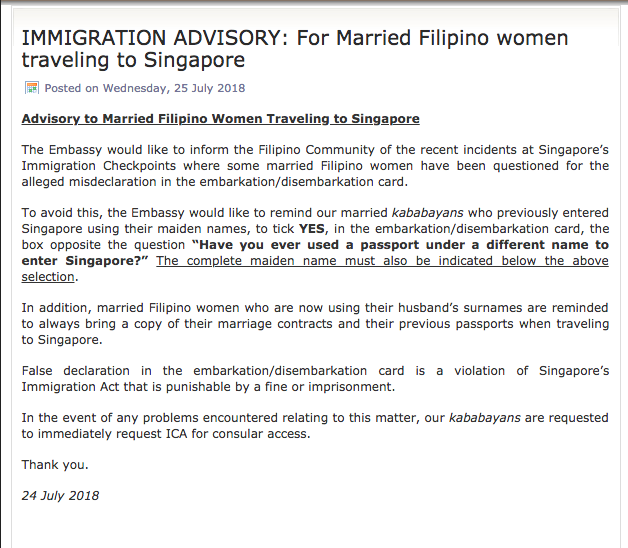 The reason given in the advisory is that “some married Filipina women have been questioned for the alleged misdeclaration in the embarkation/disembarkation card.”

The advisory reminded married Filipinas who have used their maiden names when visiting Singapore in the past that they must check the box marked “Yes” in answer to the question in the embarkation/disembarkation card that reads,“Have you ever used a passport under a different name to enter Singapore?” and then indicate their full maiden name in the space after the question.

Married Filipinas must also bring copies of their marriage licenses and old passports when they visit Singapore, according to the Embassy’s advisory.

To declare otherwise on the embarkation or disembarkation card when entering the country violates the Immigration Act and could result in fines or even jail time.

The advisory was issued both in English and Filipino.

It is unclear whether actual arrests have been made for alleged misdeclaration of marital status, or if the women were just held for questioning.

Should any Filipina be arrested for misdeclaration of her marital status, the Embassy’s advisory said that she should request access to Philippine consuls from the Singapore Immigration and Checkpoint Authority (ICA).

The Independent reached out to the Philippine Embassy for clarifications, but they declined to comment on the matter.