Home News Featured News "You can't have your cake and eat it" - Low Thia Khiang... 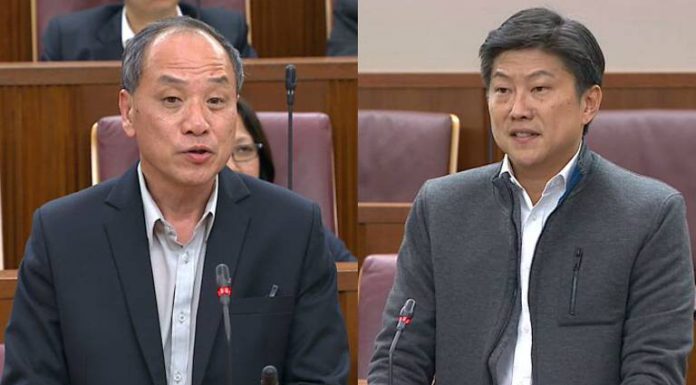 Workers’ Party chief Low Thia Khiang drew sharp criticism from Minister for Education (Schools) and Second Minister for Transport Ng Chee Meng who said that he found himself “increasingly baffled” by Low’s comments on the timing of the GST hike announcement.

Calling this year’s Budget a forward-looking one that anchors Singapore firmly in the future, Low praised how the Government accurately identified how Asia will play a larger role in the global economy and how new technologies will play an increasingly pivotal part in the future.

While appreciating the “Government’s vision statements and the articulation of how Singapore should strategically position itself in the new era,” Low asserted that the government’s announcement of the impending GST hike is premature, calling it an “unnecessary distraction”:

“The unfortunate thing about this budget is that it is looking forward too hastily for future revenue streams by prematurely announcing the GST hike.

“This has become an unnecessary distraction from the vision articulated in this Budget, and is a real distraction, causing the Government to lose its focus in getting buy-in for the vision, because it has to explain the future GST hike instead.”

He urged the Government to not let the opportunity to lead Singapore with this vision “go to waste”.

Low’s remarks prompted a “baffled” Ng, who did not intend to speak, to respond:

“I hear across the different speeches that they essentially agree with the many programmes proposed in the Budget.

“In fact, they want the Government to do more: In education, to take care of the elderly, doing more for women, more for the disadvantaged. And in one member’s speech, she focused her speech on inequalities and emphasised that inequality is a threat to our nation, that we have to ‘take concrete steps to remedy it’.”

“The Workers Party agrees with many of the Budget proposals. Mr Low Thia Khiang agrees that this is a forward-looking Budget to anchor Singapore firmly into the future, but yet the Workers’ Party says that the GST is a distraction.”

Asserting that he believes the Government has put together a “concrete, forward-looking Budget so that we can resource all these programmes for Singaporeans,” Ng added:

“Yet after all the speeches I have listened carefully to in the chamber, the Workers’ Party thinks that finding the way to fund all these programmes is a distraction.

Low clarified that his Party has not suggested the Government will have to pay for everything without exploring other funding avenues and reiterated that he thought that the most important part of Budget 2018 was about anchoring Singapore. He added:

“You can announce the intended two percent GST increase (between 2021 and 2025) anytime…We can have a full debate here, but I wonder whether is it better to announce it separately and debate it here or (debate it as part of) the budget.

“What we are saying and we are questioning whether or not is there any other avenue to look at instead of raising GST because it affects a lot of people, and we are looking at whether there are possibility of other revenue (streams) as some MPs have spoken on,” Mr Low said.

“My point was that this is basically an important Budget, and a Budget which is more looking forward to the future, but that the GST increase can be a distraction because then we end up debating on whether there is a need to increase GST.”

“I quote ‘I hope he – meaning the Minister of Finance – can be upfront with Singaporeans now so that they are not blindsided by the Government as they were with the sudden 30 per cent increase in water prices’.

“You can’t have your cake and eat it.”

Low responded that he did not say that the authorities need to “hide the intended increase in GST”. He said:

Low ended the exchange, tongue in cheek, by offering that the GST hike could be debated during the rallies at the next General Election – which must be called by 15 Jan 2021 – drawing laughs from the chamber.Follow us on Social Media