"Is it legal to have an unequal notice period between employee and employer?...Can the employer hold my EP hostage and not cancel if I don't serve the notice period?" said the foreigner who works as a software developer

A foreigner who is in Singapore with an employment pass (EP) is seeking advice on how he can leave his current company to join a new job without having to serve his full term of notice.

The foreigner, who goes by the Reddit name “Redditporean,” appears to be a software developer and claims he earns “over 6K” monthly.

Revealing that he has been employed as a Senior Developer at a local start-up since early 2017, the foreigner wrote that he feels “suffocated and chained to his desk” in his current workplace since he is the only developer presently working at this company.

The foreigner recounted that he tried to switch jobs in March last year. He managed to snag another job here and his EP was even approved.

The boss at his current workplace, however, “lured” him to stay for more money. Claiming that he was “stupid and fell for the money,” the foreigner decided to stay on at his current job and even accepted his boss’ condition that the notice period would be increased from 3 months to 6.

Months later, in October 2018, the foreigner got yet another job offer. He claims that he was “forced to stay” at his current workplace since he was offered another raise. He claims he was able to reduce his notice period to two months in the event that he is fired.

The foreigner said that he is now desperate to leave the country but he is fearful that his current employer would do something to jeopardise his EP if he chooses not to serve the full term of notice.

Revealing that a former colleague – a Permanent Resident who left the company without serving his notice – is embroiled in a dispute with his boss, the foreigner said he also fears that he will be sued if he does not serve his notice period.

Seeking advice, the foreigner asked: “Is it legal to have unequal notice period between employee and employer?…Can the employer hold my EP hostage and not cancel if I don’t serve the notice period?”

The foreigner’s post only received three comments. While two netizens advised him that the notice period is dependent on the contract he signed with his employer, another Reddit user said: “Stop using victim language like luring, chained etc please. You are an adult that consented to terms so stick to it.” 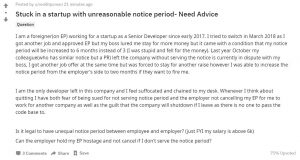