The Independent Singapore News
Home News Featured News Video of Malaysian Man Slapping a Muslim Woman for Not Wearing a... 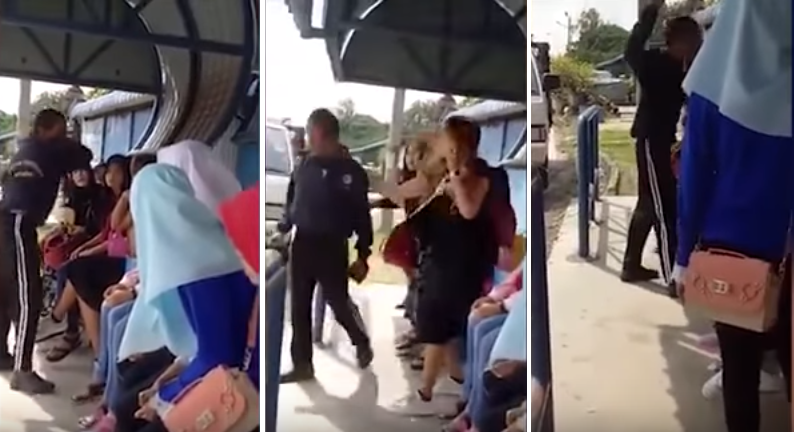 A video uploaded by Malaysian Mayy Maii Silalahi on January 5, 2018, showed a man slapping a well-dressed woman, reportedly from Indonesia, while she was waiting with other women at a bus stop in Penang. In the video, the man is heard to ask the women, “Islam ke bukan? Islam ke tidak?” (Are you a Muslim?) When one woman, who professed to be Muslim and was not wearing a hijab, said that wearing the hijab is a right and a personal choice for her to make, the man berated her and three minutes into the video, is seen to slap her. This video was widely viewed and shared, and caused netizens to be outraged.

The other women with her quickly rose to defend her, and the man is seen backing. The man is then seen to stay around the bus stop and continue to spar with the women verbally, telling the women without hijabs to go home, until another man steps in to help the women.

The video, whose full version lasts more than six minutes, has been viewed by 700,000 netizens and shared more than 6,000 times, and sparked fury online from many commenters, who have called the man’s actions as “harassment” and “condemnation.” Many have expressed anger over how the man treated the woman with violence.

Netizens have commented that how one expresses one’s religious views is a highly individual matter. Others have speculated that the man may possibly be mentally ill. Many netizens applauded the other women for coming to their companion’s defense.

Over two-thirds of the 30 million people in Malaysia are Muslim. Many of the attitudes in Malaysian society are on the conservative side, especially in rural areas. There has also been a rising incidence of religious conservatism in the county over the past few years, in contrast to the tolerance and moderation that has marked modern Malaysian society.Follow us on Social Media